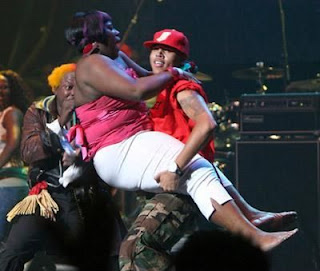 Things are not looking good for Chris Brown.

Among all the charges and allegations he also now has Jay-Z who is pretty much out to get him. Which makes me wonder: Who is scarier? Jay-Z or Beyonce?

Anyway, while many radio stations across north america have quietly stopped playing Brown’s tracks, my favorite little radio station Energy 101.5 has outwardly declared that they are done with Brown’s hits like Run It, No Air and Forever until this whole mess is cleared up.

Dang this is serious. I guess you don’t want to mess with program director Rob Mise. He is almost as scary as Beyonce.

So while it’s not yet cool to make let of this situation, at least Calgary can rejoice in never having to hear Run It again!

Wait, does this mean we’ll be hearing even more Rihanna?!?
Damn you Chris Brown, damn you.

And for all those wondering, Energy 101.5 still has not invited me to Barbados to see Kelly Clarkson and Katy Perry. Just saying….Again, it’s not like they have to. Just stating facts. Other facts include that I am bald, today is a day that ends with a”y” and the sky is blue. That is all.