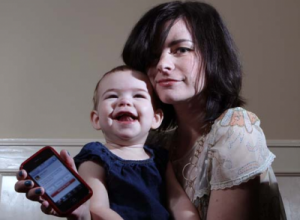 Bam!Â  Another Canadian is taking over network television!

Deadline wrote yesterday that NBC has bought a potential series from Calgarian Kelly Oxford!Â  Oxford, who is mother of three but is anything but a mommy blogger, has seen her popularity explode thanks to her hilarious (and biting) Twitter feed.Â  Right now,Â  Oxford has more than 267,700 followers, many of them being some of Hollywood’s biggest…and funniest including: Kristin Bell, Dan Harmon, Jessica Alba,Â  Howard Stern, Jimmy Kimmel and Roger Ebert.

The show is going to be about a divorcing couple and the wifeâ€™s overbearing sister, who try to raise their families together after the sale of their house falls through.Â Â Â  Oxford was quick to declare on Twitter that she wouldn’t know until January if the show would be get turned into a pilot, but the network buying the series is definitely a really good sign.

If you have a chance, check out Oxford’s blog post about having a show that she wrote bought by NBC.Â  It’s quite an interesting read, especially now, with the amount of people who are getting famous off of scandalous twitter feeds.