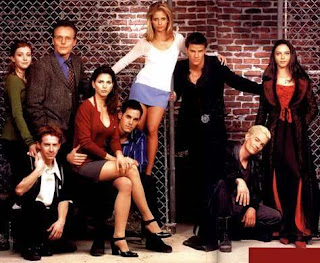 I’ve never liked anything to do with Twilight. I’ve also never made it a secret that I think the books/movies are completely a rip-off of Buffy The Vampire Slayer. As a huge Buffy fan, I’ve admittedly been annoyed that the show never got an iota of the attention that Twilight gets, even though it is infinitely better.

Even more annoying than Twilight has been the vampire ripple effect that has seen our culture become completely vampire obsessed. (Actually, that gives me a reality show idea….)
But after years of not caring about Bella, Edward or Jacob, I’m finally starting to see the point of the Twilight Saga.
Buffy The Vampire Slayer is back on the air!
I just noticed late last week that MuchMusic had started airing the series that wrapped up in 2003. Obviously hoping to cash in the on the new vampire craze, Much has decided to introduce a whole new generation of tweens to the Scooby Gang and the Hellmouth!!!
And since David Boreanaz is doing so well on Bones, maybe it won’t be long until Angel is back on the air too. As long as they skip the first two seasons, because they really sucked.
Thank you muchmusic, you are forgiven for never playing music videos.