Bruce Campbell comes back to Canada! 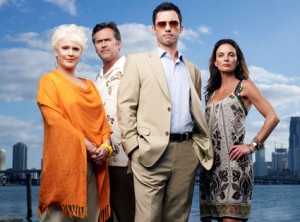 Canadians are in for a real treat when Burn Notice makes it premiere tonight on Showcase.

In case you haven’t heard of the show, Burn Notice is about Michael Westen (Jeffrey Donovan) who was a Covert Operative who had his cover blown and now he must track down who “burned” him.Â  Along the way, he picks up two friends: his ex-girlfriend Fiona and a washed-out military intelligence contact named Sam played brilliantly by Bruce Campbell.Â  That’s right!Â  Bruce Campbell.Â  This show could be the worst show on Earth and I would still watch each and every single episode because of Campbell.

Burn Notice has guilty pleasure all over it. If the gruesome blood of Dexter is too much for you, I think you’ll love the quirky, funny and very action-packed Burn Notice.

The pilot is split up in two episodes.Â  The first airs tonight on Showcase, followed by Part II next week.