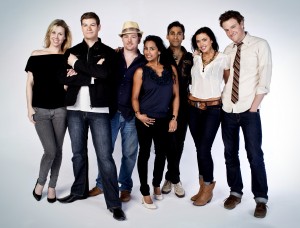 One of the most highly anticipated shows of the new fall season is the tv-version of Men With Brooms.

Here is your first look at the show that will be on CBC in a couple of months. Paul Gross fans might be a little disappointed because he isn’t starring in the show, but he does make a cameo appearance in the pilot! Â Gross will also narrate each episode and continue to make guest Â appearances.

The comedy looks pretty funny. Â Kinda like The Office in a curling rink. Â So far the female leads get the biggest laughs, but the show really does have promise, this is definitely one of the shows I’m excited to see this fall!