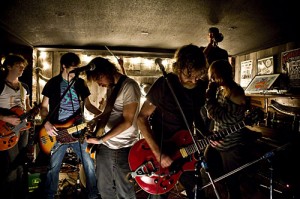 Still looking for something to get your mom on Mother’s Day? Â If you live in Toronto and she happens to be a Broken Social Scene fan, you are in luck.

This Sunday, the indie-rock bank will be playing four separate in-store performances at Toronto record stores! You can catch the band at Criminal Records (2pm), Rotate This (4pm), Sonic Boom (6pm) and Soundscapes (8pm)

The giant task of four shows in eight hours is to celebrate the release of their fourth album, Forgiveness Rock Record, which came out on Tuesday.

(You can stream it for free on Spinner.ca)

If your mom doesn’t like BSS, then she probably shouldn’t even be your mother.