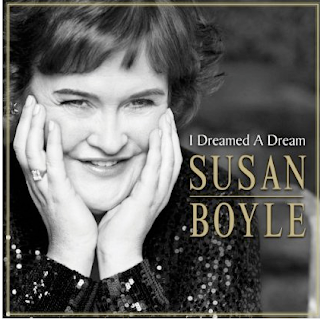 I always thought my mom would have made an excellent Susan Boyle. She can sing beautifully, yet she never made it. A lot of people think it was because she was never given a chance, I choose to blame the Napa Valley.

Either way, Susan Boyle is famous now and sadly my mom has probably missed her chance. You win some, you lose some.
And I’m not kidding when I say that Susan Boyle is famous. Her debut album is destroying the charts. Since its release last week, it has been selling like Cabbage Patch Dolls and has already made the British songstress the fastest Selling Worldwide Female Debut Ever!!! And I guess, technically speaking, the galaxy. That is insane.
And her sales and North America are just fueling the fire. Susan is already outselling young and super annoying superstars like Rihanna, Lady Gaga and 50 Cent. When she reaches number one on Wednesday, she’ll break Eminemâ€™s previous record for highest first week (US) sales this year. Some are saying she might top One Million! Susan has broken retail records around the world including selling 80,000 copies in four short sales windows on QVC. I have no idea what that last part means, but it sounds pretty freaking cool.
Have you picked up her CD yet!?
And don’t forget, Susan Boyle will be in Toronto on December 21st to sign autographs, sing and generally look overwhelmed.
Congrats susan!