A few months ago, I was lucky enough to get my hands onÂ 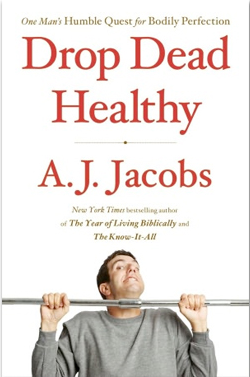 In his newest book, AJ aspires to be the healthiest man in the world. Â He doesn’t want to lose weight, or finish a triathlon, or lower his cholesterol. Â Instead, he is seeking maximum health from head to toe. Â You know how most TV talk shows talk about the latest report about what we should or shouldn’t be eating, or the miraculous to cure that can be found in our fridge? Â Well, this bookÂ chronicles Jacobs has he tries out all of these studies, with varying results. Â I started reading Drop Dead Healthy almost immediately after it showed up in my mailbox, but if I’m being honest, Â I then started hearing people talking about a little book called The Hunger Games and my ADD-riddled mind got distracted… and then obsessed with all things Katniss.

But as soon as I was done with the country of Panem, I happily returned to my journey with Drop Dead Healthy, which I’m now more than halfway though.Â So far, it is my favourite of all Jacobsâ€™ books and that is saying something, especially as the other two are aggressively staring at me from my over-crowded bookshelf. In this book, AJ doesn’t hold back on his quest to be theÂ ultimateÂ human specimen. Ever wonder if that study about laughing being able to cure is true? AJ will do it for you! What about that weird Caveman exercise class that youâ€™ve read about online? No worries, AJ is on it. The only problem with the book is that while I was reading all about AJâ€™s conquests to have the healthiest lower intestine (among other body parts) in the world, I was essentially doing nothing but sitting on my couch reading about it. Â It doesn’t quite make sense to be reading about someone being healthy, if you’re not even doing it yourself, right? Â So while I’m wary of saying that one book has inspired me to change my life, it certainly has motivated me to tackle something that should be a higher priority to me: being healthy.

So since starting Drop Dead Healthy, Iâ€™ve actually been making more of an effort to be, well, more healthy. One thing that I’ve already taken away from the book is that I think a lot of people assume that, if they decide to be healthy and they don’t end up looking like they should be on the cover of a fitness magazine, then they’ve failed. Â My goal is not that. Â My goal is to find a mix of things that I have fun doing, if I end up getting in better shape because of it, well then so be it. The challenge to myself is finding new things to do, and with exactly one month until myÂ thirtiethÂ birthday, it’s been quite a task.

The first thing I did was get a gym membership atÂ World Health. Â Truthfully, I was proud of myself for even getting a membership,Â apparentlyÂ so proud, that I let it sit in my wallet for an entire month before I actually did anything with it. When I finally mustered up the energy to go to the gym, I was actually sorta kinda excited, until I realized that I had forgotten my shoes. Mildly annoyed, my trainer wouldnâ€™t let me leave, instead we talked about what my plan for the next couple of months was going to be. I wonâ€™t tell you how many times my mind wandered and thought about what sort of McDonaldâ€™s combo I was going to get after our meeting was done. (I settled on a Big Mac and a Coke Zero.)Â  Itâ€™s not that I wasnâ€™t interested, but when you look around and see everyone else working out with such positive results, itâ€™s kinda hard to imagine that youâ€™ll ever be there, especially when you could just give up and go to the McDonalds downstairs. Hey, itâ€™s a start. The next day at the gym was a little more adventurous, by adventurous, I mean that I threw up and passed out. By no fault of the trainer, I think I thought that I was auditioning for The Biggest Loser and I clearly couldnâ€™t even fake being healthy for an hour, embarrassed, I havenâ€™t been back to the gym since. But I promised myself that Iâ€™ll go back today.Â  Iâ€™m okay with being embarrassed, as long as I learn something from it.Â  That day’s lesson, donâ€™t eat sushi and then try to work out for the first time in four years 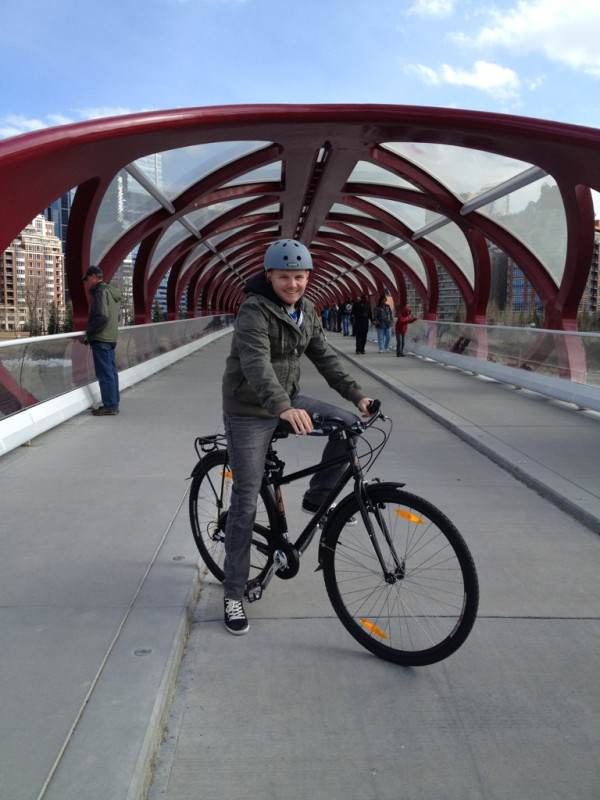 My second action towards better health was buying a bike. This may not seem like a big deal to some, but I havenâ€™t had a bike since I was child. One summer, I went away to French camp and while I was away, my parents sold my bike in their annual yard sale because, and I quote, â€œI wasnâ€™t using it.â€ Just as a reminder for those who have issues with their short-term memory, I was away at French camp. So I decided this past weekend to get a bike. It had recently come to my attention that bikes werenâ€™t as scary as I had once thought. I didnâ€™t want one of those skinny ones that hipsters use to carry their vinyl records, nor did I want a mountain bike, because if I havenâ€™t been on a bike in twenty years, the last I was going to do with one was climb a mountain. Thatâ€™s when I discovered commuter bikes. Meant for biking downtown and on bike baths, commuter bikes are far less intimidating, they look cool, come in great colours and usually only have a handful of gears. I found exactly what I was looking for at a small independent shop called Bike Bike and within minutes, I was walking out the door with a new bike, lights, a lock and yes, a helmet. Iâ€™ve only been a bike owner for two days, but Iâ€™m already excited to hit the trails and be annoyed with pedestrians. Iâ€™m not sure how often Iâ€™ll be biking around the city, Iâ€™m not even that much of a driver, I like walking because I like to see whatâ€™s going on around me, but hopefully I can incorporate my new stylish two-wheel riding device into my life. Because this is 2012, I’ve already downloaded a couple of Bike apps like Bike YYC and Map My Ride. And Iâ€™ve told myself that if anything, when Feist or Dan Mangan need an extra for one of their alt-rock music videos, my bike and I going to be ready to step in.

This post turned out longer than I meant it to be, I guess maybe Drop Dead Healthy has had more of an influence on me than I originally thought.Â  Maybe I am excited to be more like AJ or maybe Iâ€™m interested to see what a healthier Bloggity will feel like? Either way, thereâ€™s one thing I know for sure:Â  Iâ€™ll be rewarding whatever results I get with a Jr. McChicken and apple pie.