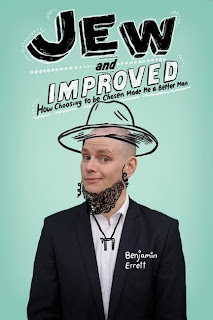 Full context: I’m not the fastest reader. Rather than wait ages for me to finish a book, I figure I’d give you a review based on where I’ve gotten so far.

Jew and Improved is a new book written by National Post’s managing editor, Benjamin Errett. At this point, I’m a relatively healthy 87 pages into the book.
It seems fitting that I’m writing this review over Easter Weekend, mostly because I’m slowly discovering that I actually have no idea what Easter is about. But then again, religion has never really been a huge part of my life. Up until Jew and Improved, my experience with religious literature has been limited to seeing the bible in the trailer for The Di Vinci Code and reading A.J. Jacob’s The Year of Living Biblically.
After proposing to his girlfriend and deciding that they both wanted to (someday) raise their kids with a single faith, Benjamin decides to convert to Judaism. Like many Canadians (i.e. me), Errett has become a lackadaisical about religion, while his fiancee is still a relatively devout Jew. After his decision to convert is made, the reader is taken on a roller-coaster of J-education.
Books of religious discovery have always been really interesting to me. There is something about someone else having to do all the hard work (such as going to service, eating weird food or given things up) while I get to just sit back, read and enjoy. It works really well for me. So far, Jew and Improved is an excellent beginners course into the world of Judaism, especially considering that up until now, all I’ve learned about Judaism is through the eyes of Charlotte on Sex and The City. Interestingly enough, Errett also mentions the popular HBO show as a main point of reference during his pre-conversion days.
Unfortunately, what continuously detracts from an interesting premise is the fact that every now and then, Errett slips out of his story on religious conversion and decides to fill us in on how he got his job at the National Post, or on how he dealt with the difficulties of long-distance relationships. Also, there is almost an entire chapter dedicated to his father, with little context to how he relates to Errett’s journey to become a Jew. While I can appreciate someone wanting to tell their whole story, Errett’s life outside of converting isn’t as interesting as it is when he is trying to find a place to study the Torah, or when he tries to socially dissect his classmates. With just under 100 pages under my belt, I feel like I’m reading an entire autobiography instead of what is supposed to be an interesting and thought-provoking journey.
(Almost) final thought: Right now, I don’t feel the urgency to continue reading Jew and Improved. I think I’ll probably give it a couple of more chapters as I do sometimes find myself learning about Judaism. And if at the end of the book, I finally understand more of the jokes in a Woody Allen movie, then it will all be worth it.