BluRay of the Week: This is Spinal Tap 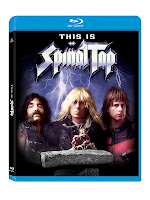 The magic of This is Spinal Tap had always escaped me. It was one of those movies that people always talked about and I never got around to actually watching it. It’s kinda like that movie Elizabeth, which I have rented a total of four times, without actually ever watching it.

But obviously I was missing out, Entertainment Weekly named it the Top Cult Movie of All Time! (Rocky Horror Picture Show was number two!)
Well the classic movie is celebrating 25 years and it’s finally being released on blu-ray today, so if you are like me, now would be the chance to get all caught up.
The movie is about the fictional British Heave Metal Band, Spinal Tap, as they attempt an American comeback. It’s filmed documentary style and if you loved Best and Show, they’ll you’ll love this movie. It surprised me how so many of the classic lines of this movie have woven themselves into today’s dialogue in the same way Wayne’s World pretty much was the basis of my entire vocabulary up until late last year.
Some of the new special features include Spinal Tap’s 2007 Live Earth reunion performance of their hit “Stonehenge”, four music videos.