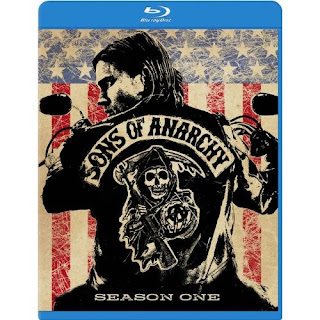 Have you ever heard of Sons of Anarchy?

Yeah me neither. But no wonder, the only people who have been able to watch it in Canada are those that have the Super Channel, which means about 6-8 people, and I assume that is because they work at Super Channel.
But for the millions of other Canadians who missed out on the show’s record first season run on FX in the states, it is now available on DVD and BluRay.
The show has a great cast that features Ron Perlman (Hellboy), Katie Sagal (Married with Children) and Charlie Hunnam (Undeclared).
The Sons of Anarchy is an outlaw motorcycle club, but the but the show focuses on the main branch in Northern California. It focuses on the trials and tribulations of the motorcycle gang and it’s vice-president, who happens to be a new dad. Like the Sopranos before it, the show gives an inside look on a culture that has been glorified in the press and movies. Sagal plays his mom and as with every role she has, she absolutely destroys it (in a good way!) If there is a more diverse TV Actress out there, I haven’t met her. I could listen to her say “crank whore” all day long.
Apparently the show is loosely based on Hamlet, but it turns out it, couldn’t be further from the Lion King, you know, because of the motor bike thing. And yes, since I never read Hamlet, I have to constantly refer to the Lion King. Plus how cool would Rafiki have looked on a motorcycle?
Well I am the first to admit that I didn’t think this show would be something that I could and would enjoy, I’m surprised how quickly I became invested in these characters, no matter how bad they were. If the first couple of episodes were any indication, I think there is going to be some great stories and secrets to come. It’s the Gossip Girl for the motorcycle world!
Sons of Anarchy’s second season debuts on September 8th on FX in the States.
As far as I can tell, no plans yet to air the second season in Canada.