Bloggity Dates with The Spice Goddess! 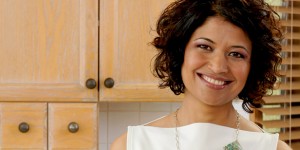 When Brad and I started dating 12 years ago, I asked him to pick me up from my place. When he came to pick me up, I was making kidney bean curry stew. My house was filled with the beautiful aroma of Indian spices. Brad knocked on the door and wanted to come in and taste my food â€“ he had never tasted my food before. So he took the wooden spoon, took a bite of the stew and guess what…… he double dipped the spoon….oh no! I panicked. I could not go out with a guy who was a double dipper. He looked at my furious red face and he knew it was going to be his first date from hell. I told him I could not go out with a guy who was a double dipper and I meant it. It took Brad several weeks to convince me that he was not a double dipper and actually he had never tasted such amazing food before. Even after 12 years, he is not allowed to touch the food I make unless he promises there will not be any double dipping!