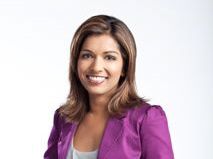 Reshmi Nair, CBC News Now
The best date I ever had was with a vegan at a raw food restaurant in Toronto. Anyone who knows me would tell you that it’s something I never would have considered doing, except something told me to go on this date. We clicked immediately. We closed down the restaurant, strolled through a city park, and acted silly on the jungle gym. As we chatted, we realized our families have known each other for decades, and we even crossed paths as babies! Meant to be. So now we’re getting married!