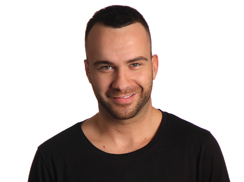 David, Cast member, 1 girl 5 gays
â€œDating. Isn’t it such a stressful bitch? I’ve had my fair share of amazing dates, and MORE than my fair share of awful ones. I’ll share one of each for posterity. We’ll start with the good: one of the first dates my boyfriend and I ever went on was to the Toronto Zoo. I don’t remember a date being so carefree and fun and easy. We spent the day walking around all the pavilions, getting to know each other better, finding out which animals we loved/hated/were scared of/secretly wanted to steal from the zoo. After spending the day lazily walking around we decided to head to The Rainforest Cafe at the Yorkdale Mall, keeping the jungle theme going. Now for the bad: Picture this, I meet up with a guy that a friend said I would be “perfect for” after said friend shows me a single (cute) photo of the guy on Facebook. I arrive for the date, that single “cute” picture was THE best photo ever taken of him. Just saying. We decided to head to the mall to see a movie and have lunch. It was awkward. He wasn’t a big talker and just didn’t seem interested. We get in the elevator to head to the floor where the movie theatre is and BAM – the entire elevator does this jolt and stops. Stops dead. We ended up being stuck in the tiny elevator for almost an hour! Think about how long an hour in a 4 foot by 4 foot box would actually be. I hope I don’t have to explain how incredibly awkward this became after the first few minutes of small-talk had passed. Worst. Date. Ever. HAPPY VALENTINES DAY EVERYONE!”