All this week, Mike’s Bloggity Blog will be celebrating Valentine’s Day with a special series called Bloggity Dates. Every day, some of the biggest names in Canadian entertainment will be dropping by to share stories of their best, worst and most embarrassing dates. If I were you, I’d take notes to ensure you have a perfect Valentine’s Day. Just be sure to invite me to the wedding. ﻿ 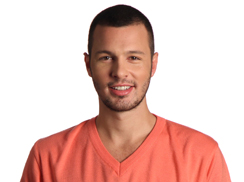 Andrew, cast member, 1 girl 5 gays
“Devin and I were friends before we started dating. Prior to us dating we had made plans with our friends to go Gay Camping on the Labor Day weekend. It was suppose to be a nice relaxing weekend. The camp site was only 45 min out of the city, my mother had lent us camping equipment (two tents, a large one for Dev and I, and a smaller tent for my friends, sleeping bags, an air mattress, etc). The forecast called for clear skies… what could possible go wrong? EVERYTHING! I had car problems, which meant I had to borrow my little sister’s beater – a 13-year-old Toyota Camry with over 500,000 km on it. I was driving and Dev was navigating. We got lost over and over and over again. The 45 minute trip quickly turned in a 4 hour ordeal, and to top everything off it was raining. We finally got to the campsite. Being a retired boy scout I was excited to set up our tent and show off my knack for the outdoors. I soon discovered that my mother had forgotten to pack m,.the poles for the larger tent. Dev, our four friends and I were forced to share a five person tent. To boot my mother had given me two single air mattresses instead of one queen. There was only one thing to do – drink. We drank, then we drank, and then we drank some more. After several hours of drinking and laughing in a wet tent we went to the camp’s “club” and tried to dance out the cold. We didn’t last long. Dev and I found ourselves throwing up behind the building – taking turns rubbing each other backs while the other vomited hot dogs, beer and vodka. It was disgusting. We threw in the towel and went back to get into bed. If you’ve ever tried to fit six people on two single mattresses in a small soggy tent you’ll understand our frustration. Not being able to sleep, Dev and I escaped our snoring, damp tent buddies. I stole dry wood from another campsite and built us a fire. We sat next to that fire ALL night. We laughed and cuddled. Sitting there all hot and nasty. I knew that if we could have fun on this disastrous trip, I could take that boy anywhere.”