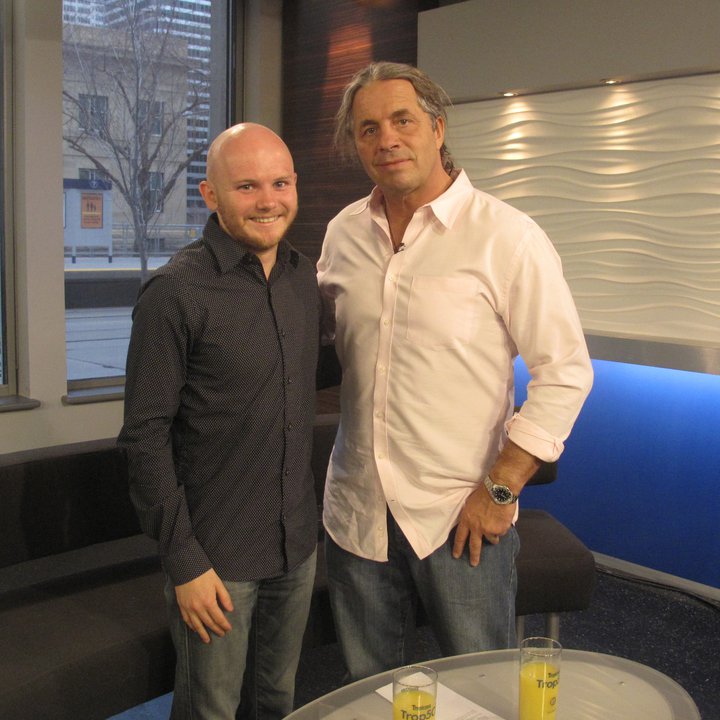 You probably wouldn’t know it, but growing up I was a HUGE wrestling fan, specifically the WWF.Â  I remember basically scheduling my entire eight year old life around anything number of WWF programs. I’d go and help my dad with Saturday groceries, but only if he promised to back in time for the wrestling.Â  We had a giant body pillow and I essentially beat the shit out of it pretending I was a wrestler. Â  My parents won’t talk about it, but I’m pretty sure they wanted to send me to a psychologist after Shawn Michaels kicked Marty Jennety through the pane glass window of the Babershop.Â  I was DEVASTATED.

Well even though that was a long time ago, earlier this week I got to meet Bret Hart and to say I freaked out, would be a complete understatement.Â  He was co-hosting Breakfast Television in Calgary and I knew that it would be my chance to meet someone that was essentially my idol growing up.Â  I’m not being sarcastic, I couldn’t imagine anyone cooler or more Canadian than the “best there is, the best there was, the best there ever will be.”

While my encounter with Bret was short, it was something that I’ll never forget.Â  He’s suffered a stroke and moves a little slower than he used to.Â  His voice is quiet but he still carries himself with the confidence that made him an international superstar.

How nervous was I?Â  Look at my shoulders in the above picture,Â  it looks like I’m trying touch my ears with them. So completely and totally nervous.