Did you watch Lost last night! It was one of my favorite ones this season. Which isn’t saying much. I’m usually not a John Locke fan, but I was all over this particular episode. However there was one thing I noticed that made me think. What does the below pic from last night’s episode remind you of? This post perhaps? Awkward. 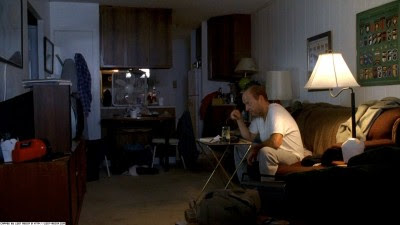 note to self: never have confrontational meetings with certain family members in buildings higher than 2 stories. Or planes for that matter.

Next: American Idol
I would like to point out that my favorite moment of last night’s show was Ryan forgetting the name of Brad Garrett’s show. Simply stating: ‘Brad Garrett’s show is up next.” Of course, in Canada we were treated to the continuously awful Jeff. Ltd. But Degrassi takes over that spot next week, which is definitly a good thing.
So
America decided to keep Samosa at least for one more week. Some are disppointed by this, but really it will come back to bite America in the ass. Being in the Top 10 means you get to go on the American Idol tour all around the country, which means that from Bangor to Orlando and Kansas City to Sacramento ears will be bleeding all summer to the delightful sounds of Samosa butchering every song he can get his greasy little hands on.

Goodbye Stephanie, we barely knew yee. Which I think was part of the problem.