Today was a bit of an historic day in Calgary, as Lime Bike launched just a few hours ago, making it the first bike-sharing program to ever come to the city.Â  It’s surprising that it’s taken this long, given the fact that Calgary has the largest bike path network in all of North America, but never the less, it’s here now and it’s pretty fantastic…except for one pretty big problem.

The Lime Bike company works a bit differently than other bike sharing offerings you might see in other cities, in the sense that it’s dock-less. That means, there’s no stations that you have to find.Â  You can simply leave the bike wherever you please. In a park, up against a building, really anywhere in the home zone. 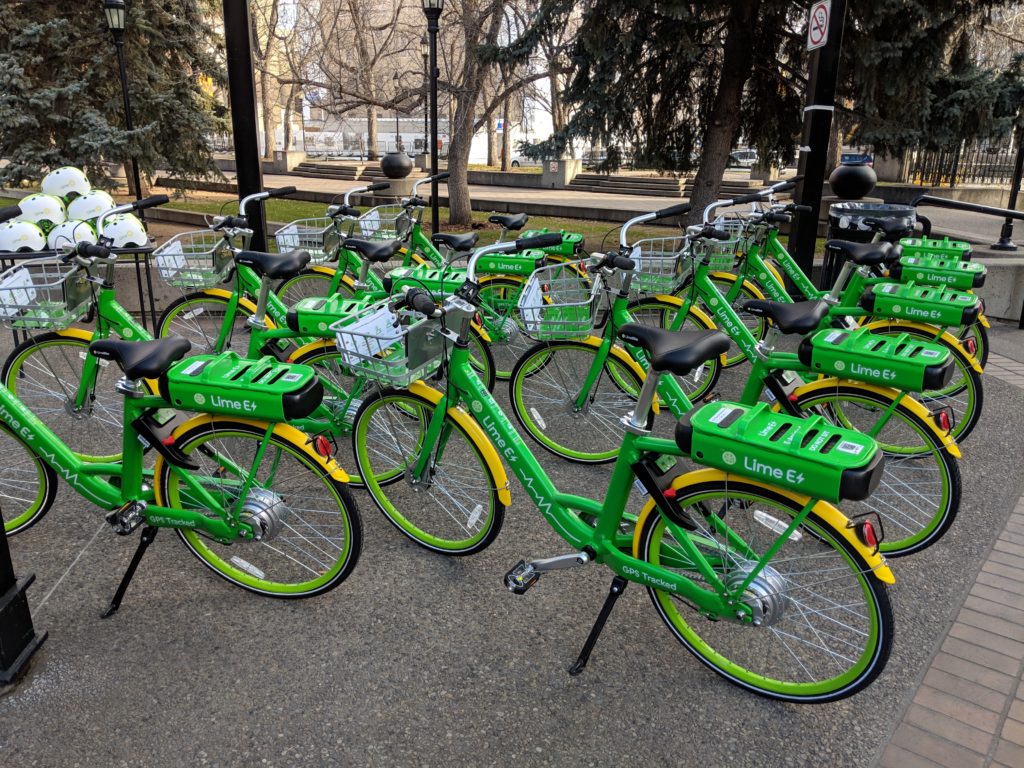 To rent the bikes, you have to download the Lime Bike app. Then it costs a dollar to unlock the bike and then thirty cents a minute after that.Â  Â You can use the app to find the bikes, although you can’t reserve them.Â  This is a bit annoying, because you could be walking towards one, and if someone takes it, you’re out of the luck.

But the really annoying part comes down to the helmet, or lack there of. Now this isn’t a debate of whether or cyclists should be wearing helmets or not.Â  In the city of Calgary, cyclists do not have to wear helmets if they are over the age of 18….unless they are e-bikes. Which Lime Bikes are. E-bikes are electric assisted bikes, which means that electricity does a lot of the work for you.Â  This makes biking more accessible and yes, a little more fun. 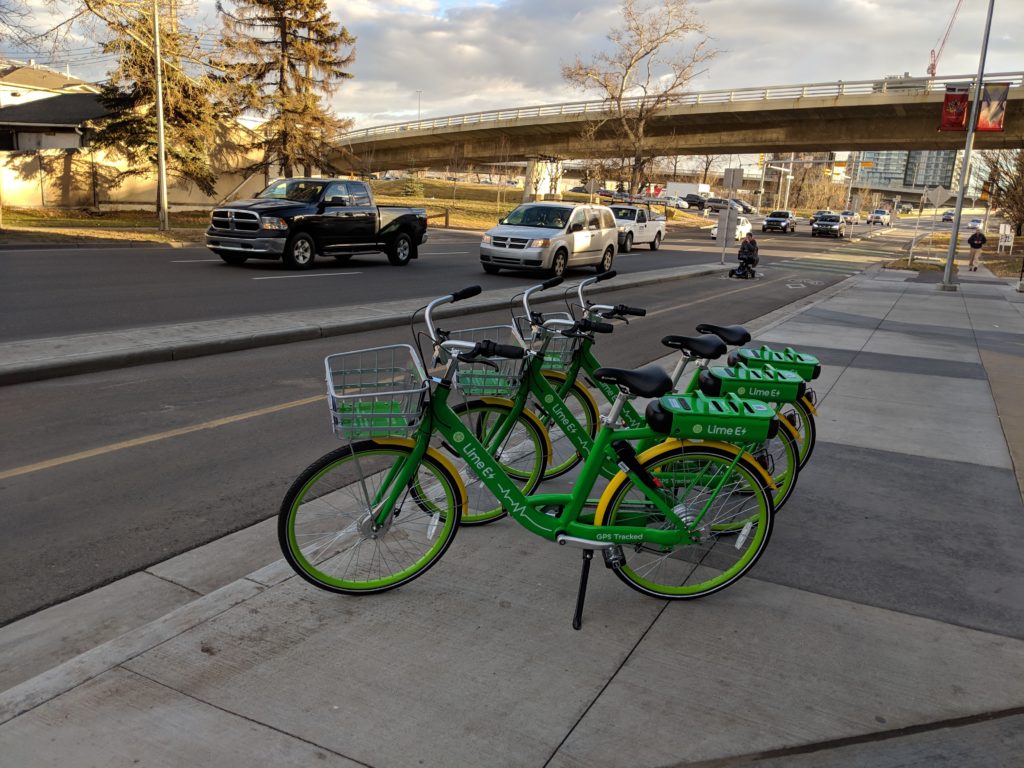 But thanks to a provincial law, electric bikes require wearing helmets.Â  Which Lime Bikes doesn’t provide when you rent a bike. This law exists because the law is grouping electric bikes with motorcycles and I think you can agree that they aren’t the same thing, not at all. I’m not sure if they are, but the speed of electric bikes can regulated, so if you’re not going to make people using pedal bikes wear helmets, why make those using e-bikes?

So, for you to lawfully make use of the Lime Bikes, you basically have to be walking around with a helmet.Â  I don’t know about you, but my helmet isn’t necessarily handy and easy to carry around. To me, the even bigger problem is that this eliminates tourists using the bike sharing program, which to me is the number one reason to have bike sharing.Â  It makes the city accessible and easy to navigate, but if tourists have to use helmets to use the service, they simply won’t.

So what are the solutions?Â  The City and Province could change the law, or at least say they aren’t going to enforce it.Â  I was thinking it would be cute if on top of Little Free Libraries, we had Little Free Bike Helmets, and people could use the bike helmet and drop it off at another location. Or Lime could provide helmets with their bikes. But both of those last two options give me the heebie jeebies when I think about sharing bike helmets with strangers. At the very least, I’m glad to be bald.

So day one of Lime Bike is pretty good. It’s an amazing step forward. I took one for a spin, and it was so fun to be able to bike up some of Calgary’s most notorious hills and not die half way up. But there’s a big problem with the program, and unless we figure it out, I’m not sure bike sharing will ever really take off. 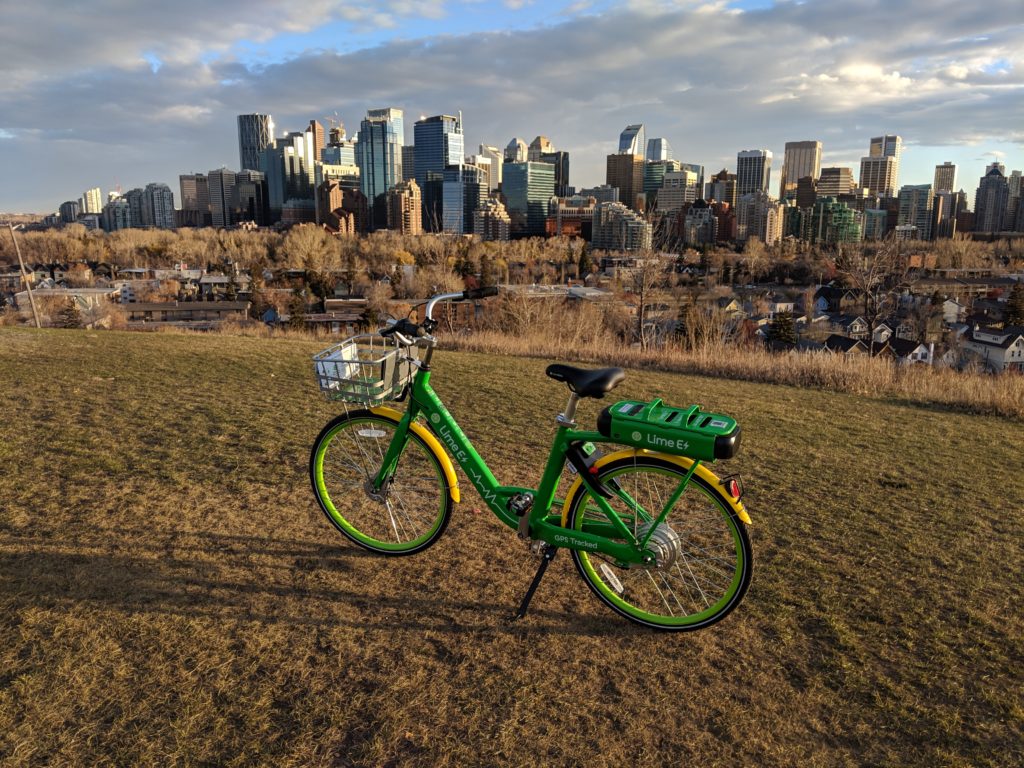