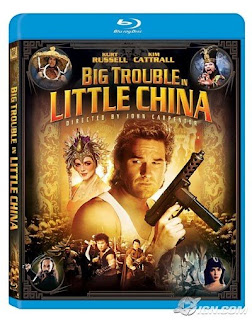 I know most people see re-releases as a chance for movie studios to just make more money, butyou know, they are starting to grown on me.
This weekend I got the chance to watch My Cousin Vinny and Big Trouble in Little China, both for the first time! Now growing up in the late 80’s, early ninties, I had been familiar with these movies but often chose to watch Labrynth and re-runs of Fun House.
But now that I’m all grown up and regularly chose to watch movies instead of call my family, I shockingly found the time to watch these two movies, both of which are released on Blu-Ray today.
Up first was Big Trouble in Little China, which probably would have been simply called BTILC if it had been released in today’s acronym obsessed blogger day in age. This is the kind of movie that is so weird, I would have paid a million dollars to be in the pitch-meeting for it.
Screenwriter:
“Okay, so there is this truck driver right, and he has this friend whose girlfriend gets kidnapped. For some reason, there is a mysterious world underneath San Francisco’s chinatown and the truck has to go there to save her. While down there he runs into a 2000 year old man who needs to marry a green-eyed girl. You still following me? Then they have to defeat three bad guys all while getting help from a lawyer, tour bus driver/sorcerer and entire street gang!
So what do you think? Can I have a couple of million dollars to make it?”
Regardless of how incredibly weird this movie is, the cast, which includes Kurt Russell and Kim Cattrall, certainly made it more entertaining then it ought to be. This is a another re-release that really benefits from being on Blu-Ray, especially with all the great special effects that were considered top-of-line when they first came out. On top of all that, the commentary from Russell and director John Carpenter is some of the most honest we’ll ever hear about a movie. 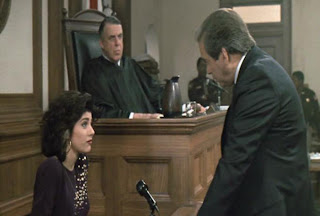 Even though it was ridiculously nice weather outside this weekend (aside from this), I still found time to squeeze in My Cousin Vinny. Watching this movie was like paying off that cellphone bill that has been sitting on your kitchen table for months. I felt so good to finally scratch this movie of the “must-watch” list, since it had been nagging at me for years.
You’ve all heard of this movie, mostly because of Marisa Tomei’s Oscar Winning performance as a tough talking girl from Brooklyn. The win was surprising because nothing about this movie screams Oscar. Sure it’s enjoyable, but Oscar winning? Now that’s a stretch. Not that Tomei didn’t deserve it, I like the girl so much, I’d giver her a Nobel Prize for simply acknowledging my presence on this earth.
This movie’s special features suck, which is especially strange considering this a re-release, couldn’t they have at least scraped together some screen tests or a a blooper real.
But it’s on my list and now that simply leaves me with approximately 4324 movies to go. Up next? Maybe The Dark Crystal.
BTILC and My Cousin Vinny are released on blu-ray today.