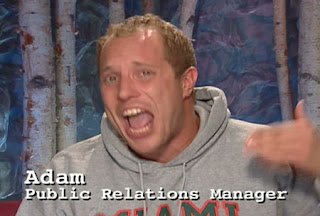 I have an embarrasing confession.
Everytime I pack my bags and leave my house, I always kinda pretend I’m on Big Brother and I was just evicted. I don’t know why. I wish I didn’t think it. But the truth is I do. And I know that if you were going to think about Big Brother, you should think about winning but I think about losing. Why? Maybe I’m narcissitic. I don’t really know.
So today I packed my bags and I headed for the big city of Vancouver….for a week. While it is only an hour flight away it is like an entire different way of life and right now I’m completely caught up in the warm weather and the fact that you can see the mountains and the ocean at the same time.
But that’s not what I want to talk about. I want to talk about Big Brother because this season is RIDICULOUS! Never before has Big Brother blatenly sold sex and so far this season it seems to paying off.
There is this amazing site called Morty’s TV Big Brother. And basically it is a site of people that pay for the Big Brother live feeds and write about all the goings on in the house when we aren’t watching.. By reading it you can find out who is going to be evicted, who on HoH, who is hooking up, who won Veto. Pretty much anything, it really gives you a different dynamic on the game.
So over the past couple of days I have been reading it and when you watch tomorrow night you will be amazed by all the crazy shit that has happened since we last saw our attention seeking wannabe celebrity contestants. I’m not going to ruin it for you, so you won’t find any spoilers here, but here are a couple of hints:
-a BIG secret has already been revealed
-one person has already left the house for personal reasons
-one person has already come back(not the same as above)
-one team has had sex in the shower
-one team has had sex in a bed (not the same as above)
-another team has kissed
-one team has made up.
I honestly don’t know how they are going to fit this all in in one episode, but it should be interesting. And if thing keep going the way they are, the three big surpises the producers put in place will all but be eliminated by weeks end!
Welcome back Big Brother indeed.
*******************************************
I’m going to be in Vancouver all week and I officially on Jennifer Aniston watch!