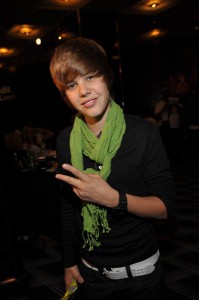 Bieber fever is about to hit the one last form of entertainment that has so far been immune to it: the movie theatre.

Paramount Pictures and MTV Films have jointly announced that the Biebs will be starring in a movie about his life.  No word on the script but it is estimated to be about 17 minutes long.  And yes, it will be in 3D.  And if having the starring role is not enough, he will also be producing the movie, just as soon as he learns how to spell it.

But Justin Bieber isn’t going to stop at being a movie star, he’ll also be attacking the world of TV. Justin will be appearing in an upcoming episode of CSI and the season premiere of Shaq Vs. And just in case you don’t know every single little detail about the tween who is still waiting to hit puberty, his memoires will be released in October.

And to top it all over, Justin just picked up his first MTV Music Award nomination as Best New Artist

Meanwhile struggling actors, novelists and singers anxiously await anything while still serving you your latte.

When will the insanity end?