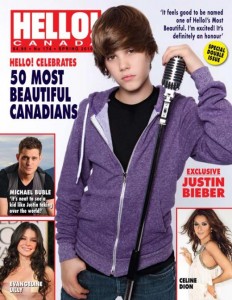 You can file this next story under “Desperate to sell magazines.”

This week Hello Magazine put out their annual 50 Most Beautiful Canadians issue. Â Like People Magazine before it, the names on the list aren’t really surprising: Michael Buble, Evangeline Lilly, Celine Dion, Jian Ghomeshi, Alyia-Jasmine all made the cut.

Sadly, so did Justin Bieber.

And before you Bieber fans who google his name incessantly go nuts, give me the chance to explain.

My issue isn’t with Justin Bieber’s music or even his ridiculous haircut. Â My issue is with calling a 16 year old boy beautiful, especially “most beautiful.” Â Obviously there is no scientific way of measuring beauty, but there is a legal way: Over 18 Years Old.

Does anyone really think the editors of Hello! actually think that he is the most beautiful. Â If so, like pedophiles and catholic priests before them, they should probably be arrested. Â Of course, they don’t think he is most beautiful, but they do think he’ll sell the most copies.

Obviously magazine gotta do what they have to do to sell issues, but maybe they could have saved the Bieber feature for another week. Â Man or woman, straight or gay, it is always creeping calling 16-year olds beautiful, especially when it is to just make a quick buck.