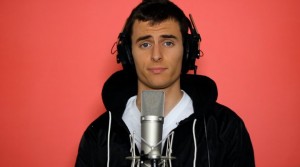 With only a few days left of 2010, I thought it would be a great to look back and talk about some of my favourite things of the year 2010.Â  If you have any of your own suggestions, make sure you leave them in the comment section.Â  My memory is awful, I could probably use the reminder.
Favourite Youtube Star:
Mike Tompkins.

When 2010 started no one knew who Mike Tompkins was, now twelve months later, he is one of the biggest Canadian stars to ever hit Youtube and we are the better for him!Â  Since posting his unique music videos just a few months ago, the London, Ontario native’s career has taken off.Â  He’s been featured on Perez Hilton, Ellen, Macleans and his videos were even spoofedÂ on the Today show! And now he is working on Timbaland’s new album in Miami.Â  Not that I’m one to brag but Mike’s Bloggity Blog featured him way before any of these guys.Â  Okay, turns out, I am one to brag.

The great thing about Tompkin’s success is that he doesn’t seem to have done it on purpose. He took an original idea (used only his mouth and voice to make full musical arrangements) and made progressively cooler videos and before you knew it Glee was copying his version of Katy Perry’s Teenage Dream.Â  Okay, that’s just a hunch of mine but puhhhlease.Â  Tompkin’s version is amazing and I bet Katy is kicking herself just a little bit.Â  The results of his hard work are definitely paying off.Â  Some of his videos have already racked up more than seven million views and his most recent (Rihanna’s Only Girl) has been watch by almost two million people in just a few weeks.

I’m excited to see what happens to Mike Tompkins career in 2011 but let’s be honest, I’m more excited about his new videos.