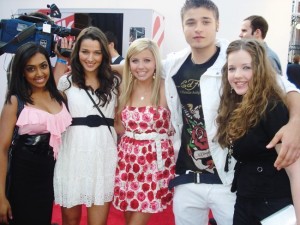 I spent most of 2010 defending my enjoyment of Degrassi but this time, I’ll let the numbers speak for itself.

In it’s tenth season, the show swtiched networks,Â produced more than 48 episodes and reached a huge milestone: more thanÂ  220 episodes since the show premiered in 2001!Â  Not bad for something that used to be called “The Next Generation”.Â  2010 was also the year that Degrassi was named Canada’s Favourite TV Show at this year’s Geminis.Â  Whether you like it or not, the show doesn’t seem to be going anywhere….thankfully.

In a matter of weeks the show;s twenty-two member cast tackled subjects like abuse, teen pregnancy, stabbings, coming-out, alcoholism, hoarding, school-uniforms, Â lock-downs and most importantly, introduced Adam, Degrassi’s first transgendered student.Â Â  All of this was promoted in what I’m choosing as the coolest promo of the year:

This was also the year that I got the chance to visit the Degrassi set.Â  It was amazing to see that the entire set is basically a city block with real stores, cafes, schools and it’s all staged in and around the show’s production offices.Â  The show’s current cast is extremely strong and are proof that show’s can evolve and morph and not hurt the quality of the end result. Show’s like Glee should definitely take note and copy Degrassi’s model.

For a show that has already produced stars like Drake, Shanae Grimes and Nina Dobrev, it’s exciting to know that the stars are probably giong to keep coming.Â By doing theÂ nameÂ Degrassi proud, the show was definitely one of my favourites of 2010!