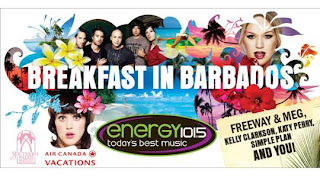 Getting sick of winter?

One of my fav radio stations, Energy 101.5, is bringing back one of their most luxurious contests, Breakfast in Barbados! Â

Now last week Freeway Frank (co-host of the morning show) got mad at me for saying that I tuned off my radio during the announcement of the contest because I was jealous. He said he didn’t realize that it would be something that people would be jealous of and not want to listen to!

Um excuse me Frank, who wouldn’t be jealous of a week vacation in Barbados with beach front seats to concerts with Kelly Clarkson, Katy Perry and Simple Plan (hey two out of three ain’t bad)!

They are obviously not going to send me along (once was probably enough), so yeah, I was and continue to be a little jealous. But if you are one of those 8 people that win the grand prize, congrats! That trip sounds AWESOME.

And in case people are wondering, yes, I am free the week of April 20th. I’m stating this for no other reason but to tell people that this is the week of the trip and that I am free. No plans, lots of vacation time. Free, free and free. Wide Open. I already have a passport. So I’m free. Is that clear? I’m free.

Oh in case you don’t live in Calgary, other stations from all over Canada are running it to. Â They include Victoria’s KOOL FM, QM FM Vancouver, Edmonton’s The Bounce, Winnipeg’s Curve 94.3, CHUM FM in Toronto, Ottawa’s MAjic 100FM and C100 in Halifax. Â Plus Etalk is also running the promotion. The problem with that one is that you then run the risk of seeing Ben Mulroney with no shirt!Â

Remember if you win, I am free free free.

I can also fly out of Toronto.