BEP Parties the night away! 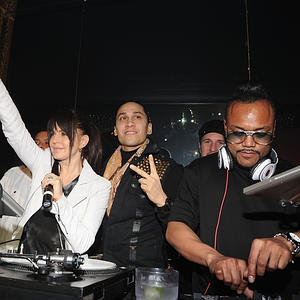 The Black Eyed Peas surprised party-goers at Calgary’s WEST Restaurant and Bar last night when they showed up, took over the DJ booth and threw one hell of a party!!!

The Peas are in Calgary for their nearly sold out show at the Saddledome and have seemingly been enjoying their extra time in Cowtown.Â  Earlier in the Day, Wil.I.Am tweeted “We are having a black eyed peas vs our tour crew soft ball game in calgery at foot hill stadium…” I don’t know if anyone went to watch them, but I thought it was pretty cool that the band was pretty open about where they were hitting some balls.

Later on in the night, Wil.I.Am tweeted again: “What are the hot clubs to go to in calgery on a saturday night??? :/” Because I was already out, I tweeted back some suggestions, but obviously they were too scared to dance with all of this because instead they ended up at West and apparently the party was INSANE!

It is awesome to see that a band so huge, still knows how to have a great time with their fans!Â  And yes, I’m totally kicking myself for not going to West.