It’s been several weeks since the finale of Being Erica and fans of the show like me have now had sometime to deal that shocking season finale.Â  While naysayers are saying that the show won’t be returning for a fourth season, fans have their fingers crossed that the show’s shocking cliff hanger won’t remain unresolved.Â  So instead of waiting for CBC to make a decision, I went right to the source, executive producers Jana Sinyor and Aaron Martin, to get my burning questions answered!

Warning:Â  If you live in the USA, season three premieres tomorrow on SoapNet.Â  Spoilers galore can be found below. Here’s a sneak peek of tomorrow night’s premiere. 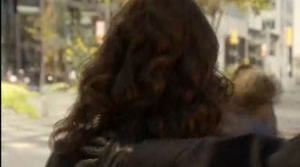 Bloggity: Okay, just tell us: Who is Erica’s first patient?
Jana and aaron: Kai. Ha-ha, just kidding. Or are we?

Bloggity: That’s not very helpful. Can you at least tell us if the patient will always be wearing gloves?
Jana and Aaron: Yes, it’s a new trend we’re hoping to start.

Bloggity: Do books about cat lullabies really exist?
Jana and Aaron: Aaron and I are writing one.Â  It’s our next exciting project.

Bloggity:What was your favourite episode of the season?
Jana and Aaron: We loved the finale – 312, as a finished product. We had the most fun writing 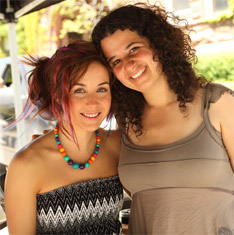 the gay pride episode, 306. So much of this season was emotional and heavy, 306 was a lot of fun because it was silly and crazy and sexy and weird. And we like that stuff.

Bloggity: What was with that out of place Christmas episode?
Jana and Aaron: CBC wanted to do a holiday special, and it made sense to air it the week before Christmas. It’s a stand alone episode, something we’ve never done before. It turned out warm and fun and light – which is exactly what we were going for.

Bloggity: When will we know if Being Erica is coming back for season four.
Jana and Aaron: Soon, we hope. We’ve got our fingers crossed.

Bloggity:If Rick Mercer-forbids the show doesn’t come back, can you do a Being Erica season 4 via comic books (ala Buffy).
Jana and Aaron:Yes! That would be great.

Bloggity: Who is your choice for Erica Strange in the upcoming American adaptation?
Jana and Aaron: Erin Karpluk. No one else is Erica in our eyes. 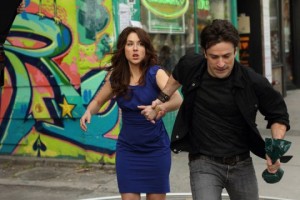 Bloggity: Are you happy with the way CBC has been dealing with the show?
Jana and Aaron: Yes. They’ve been beyond supportive from day one. They take risks, they trust us, they get the show, and we feel that they are behind us 100%.

Bloggity: It seems like you never know who is going to knock on Erica’s door. Does her apartment have the worst security ever?
Jana and Aaron: AreÂ  you kidding? How about the fact that Erica’s apartment and the hallway leading to it repaints itself every other episode. Erica’s apartment adds rooms between seasons, the kitchen changes, gets bigger and a window appears out of nowhere.