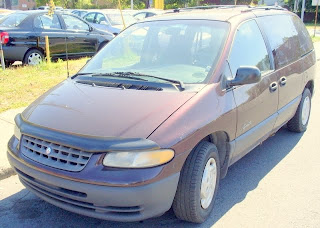 This is not cool Toronto.

BC band Minto had their van stolen last night in Toronto. And if they don’t get it back soon, they are going to have to cancel their entire national tour!!!!
The above picture isn’t the exact vehicle, though it’s pretty close.
If any of you Toronto readers could lend a hand by looking for it, that would be great. And if one of you readers took it, that’s totally not cool. This is the bands first venture to Toronto as a touring band and you don’t want them to leave Toronto with a bad taste in their mouth, do you?
Show your support by checking out their myspace page and give them a listen!
See details of the van here:
vehicle: 1998 Plymouth Voyageur
colour: mauve
license plate: 530 AWX (BC plates)
taken from: Dufferin and Dupont, between 10pm and 8am October 26/27