Battle of the Bullshit: Calgary vs. The Swell Season 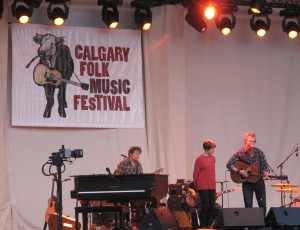 I’ve always insisted that the Calgary Stampede is really for the tourists and the Folk Music Festival is actually what Calgarians love more than anything.

Admittedly this year’s Folk Festival is my very first and I’ve been having a blast. If this is your first time reading the blog, Â the band that I’ve been most excited about was The Swell Season. Â It consists of Glen Hansard and Marketa Irglova from the Oscar winning movie Once.

I had not idea that their performance would be one of the most controversial sets the Calgary Folk Music Festival has ever seen.

Even before they came to Calgary the duo already seem very anti-media by not allowing interviews. Â On the day of their show, they would not let anyone in the photo pit. 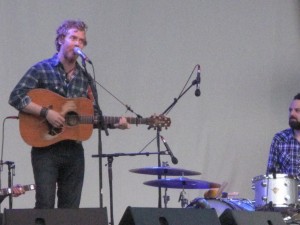 By the time Swell Season took the stage, they were the last second band of the day. Â Headliner Michael Franti would close out the night, much to the happiness of Calgarians who obsess over Franti like no other.

After a couple of songs, Hansard remarked on the audiences complacency towards them, asking “This is a music festival, right? Â Is anyone here to see us? Â If you are here for us, stand up.” Â At this time, about half the audience stood up, mostly in the back. Â But then they quickly sat back down, because Calgary HATES standing up for music festivals.

Two songs later, after I Have Loved You Wrong, Hansard took to the mic again and called the audience “bullshit.” Â He was upset that so many people were talking during their performances. Â And I couldn’t agree more, the audience was treating them like they were a circus act, no respect at all. 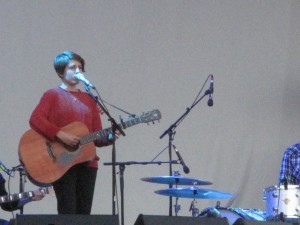 The next song was the Oscar winning Falling Slowly (video below). Â It was here that Hansard finally had enough of people who refused to even pretend that they were enjoying their music and asked the real fans to come over the barricade and have a good time. Â This was really frustrating for the people who had been holding their places with tarps since the night before. Â It was an amazing sight to see.

The rest of the set felt like a real concert as the real fans had made their way to the front and enjoying the wonderful songs.

For the rest of the night, the topic of conversation was if Hansard was out of place or not. Â Most Calgarians were upset, saying it was disrespectful. Â They thought: “it’s a folk music festival, it is supposed to be relaxed.” Â To which, I couldn’t disagree more. Â I don’t think you have to stand up and go nuts the whole time, but if an act asks you to stand up, then you should stand up and have good time. Â That’s what they are there to do. Picture yourself giving a presentation in a boardroom and everyone is talking and doing crosswords, isn’t that disrespectful?

Not standing during concerts is definitely always been a problem in Calgary. Â I’ve been to countless shows, including at the folk festival, when the acts were astonished that no one was standing. Â  Audiences get comfy in their tiny little chairs and don’t move.

I don’t think the Swell Season is going to change the stubborn and annoying culture of the “sitters”, I’ll just have to be content that I have something in common with Oscar winners. Â That is good enough for me.