Badass: The Fallout (plus Cloverfield review) 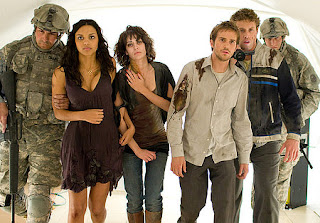 Ok so the other day I mentioned that my friends and I were going to sneak into two movies in one night in the hopes of finally solidifying my status as a true bad ass.

Well that didn’t work. But not because we didn’t try, but because we couldn’t….physically. You see we decided to go to Cloverfield first. We knew it would sell out all weekend and we could get tickets right then and there so we just went for it.

I’ll talk about the movie in a second, but for now let’s talk about how my stomach liked the movie. It didn’t. Not at all. And I have a strong stomach, I can read in the car, I’m fine flying, rides are no problem. But my insides met there match in the final 20 minutes of Cloverfield. I think what did me in was the scene when the characters are running up an abandoned building and not only are we watching it through a shaky hand held video camera there are also tons of those emergency strobe lights. Well lets just say I felt like I had enjoyed one too many Jaggerbombs. And after the movie while kneeling over in the lobby I decided that the only way I wasn’t going to throw up was by not watching 27 Dresses. So we went on our way and enjoyed a warm pint of Peptobismal.

Now on to the movie. (Don’t worry, no spoilers here) In the words of 27 Dresses star Katherine Heigl: I seriously loved Cloverfield, seriously.
The movie which is really just like the Blair Witch Project but instead of a scary ghost we follow a group of party goers trying to escape New York City as a mysterious monster attacks this city that just can’t seem to catch a break.

The movie has garnered lots of attention because of the amazing marketing that has been going on since last year’s Superbowl. What I was really happy with how much the trailers and commercials didn’t show us. Going into the movie we still had no idea what the monster looked like, plus trust me when I tell you this movie has a ton of surprises in store that leave your mouth wide open. If you really want to see what the monster looks like you can click here and see a pretty accurate concert drawing. This movie also boasts perhaps the most shocking, gruesome, awesome death of a good character ever on screen. The entire packed theatre was terrified. It was pretty sweet. There are so many exciting scenes in this movie that when it ends after a short 75 minutes so kinda wish there was more.

I would also like to point out Lizzy Caplan. You might recognize her at Lindsay Lohan’s cool goth friend in Mean Girls. Others might recognize her as the object of Jason Ritters affection in the short lived series The Class. Even though there is a monster running all around killing all their friend Caplan’s Marlena still manages to steal every scene she is in. It takes a great actress to pull off great comedic timing as you are walking into a dark tunnel knowing that you probably won’t make it out. Garfield would be proud (you’ll get it when you see it).

Overall Cloverfield is probalby the most entertaining movie we will get in a long time. It isn’t that scary, more suspenseful, and is definitely worth the price of an admission and a bottle of anti-nausiant.

Don’t forget to VOTE for moi!