Attack of the flying limbs 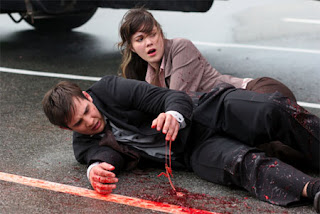 I wouldn’t say I love horror movies. I do like some of them though. When I was in high school I became freakishly obsessed with Halloween (the movies, not the day, I HATE the day) and made it my mission to own every Halloween movie on VHS. big.mistake.
Also back when I was in High School a movie called Final Destination came out in theatres. I remember seeing it with my friend in the Twoonie theatres back when my hometown had them. This movie pretty much traumatized me because it prayed on my biggest fears. Devon Sawa having an acting career.
But luckily they’ll killed that guy and the series went on to make two succesful additions to the series. Of course by succesful I mean financially, not film standards.
The first movie visions saved a handful of kids from a plane crash, the sequel saved a new bunch of brats from the craziest car crash scene ever filmed (I haven’t driven a log truck since), and most recently Final Destination 3 took place on a Rollar Coaster.
While none of these movies are particulary great, they are fun for a horror fan to watch. That is why I was pumped today to see that they currently have a Final Destination 4 in production and this time it’s going to be 3-D!!!! Which it seems pretty much every movie is doing now a days. Look out for the flying limbs!
This time the scene of all the death will be a race car track. I’m guessinga race car flying out of control into the KFC and Bud Lite drinking fans. And I’m going to be honest when I say that I would be OK living in a world with a few less Nascar fans. What is with their jackets?! I mean really! Lime green?
The movies “stars” Krista Allen (big boobs from Liar, Liar or Billie #2 on Days of Our Lives…or so my sister says….ahem) and some other randoms…… No release date has been announced but I’m guessing around Halloween.
Is it too soon to buy my tickets?