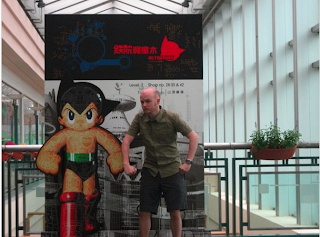 People do a lot of things when they are excited. They jump for joy, they clap their hands, they slap someone’s ass.

I like to do a combination of all three. I feel it makes me unpredictable and yet a little more relatable.

Anyway, the poor people in my office witnessed all three of these actions (in no particular order) when I read the following headline on Movieweb.com:

Honestly, could a more perfect headline ever be constructed? Aside from “Ryan Seacrest hires Mike Morrison as new sidekick“, I don’t think so.

Obviously it’s perfect because Kristen Bell is my BFF in training ever since she starred as Veronica Mars. Mainstream people started paying attention after her role as Elle on the sucktastic season of Heroes and that was all before she starred as the titular star of Forgetting Sarah Marshall.

Now as for Astroboy. While I’m not ecstatic at the prospect of a CGI Astroboy, I’ve recently been rediscovering my love of all things Astro. I even went out of my way during my recent trip to Hong Kong to find the often rumored, rarely seen Astroboy Store and bought the most expensive T-shirt I have ever paid for in my life. As a child I used to dream that I would someday be on Astroboy, I actually used to get some ringing in my ears and I would always pretend that I was just like Astroboy because he got the same ringing when someone was in danger.

Sadly, my mother never bought me my much desired flying boots, always opting for a package of lifesavers and a awkward side-hug to celebrate the day of my birth.

So that is that. The movie will also star Nicolas Cage,Scarlett Johansson, Donald Sutherland, Bill Nighy, Nathan Lane, Eugene Levy, Freddie Highmore and will be opening next year! Perhaps even on my birthday and I’ll finally get those boots!