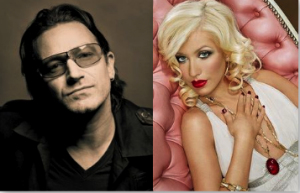 U2 and Christina Aguilera have both just announced that their summer north american tours have been canceled. Â U2 pulled out because of Bono’s bad back and Aguilera pulled out due to scheduling conflicts, though lack of sales is probably to blame.

And with Lilth Fair not selling that well (yet), this is apparently not the summer for concerts?