Arcade Fire wins the Polaris Prize…but do they need it? 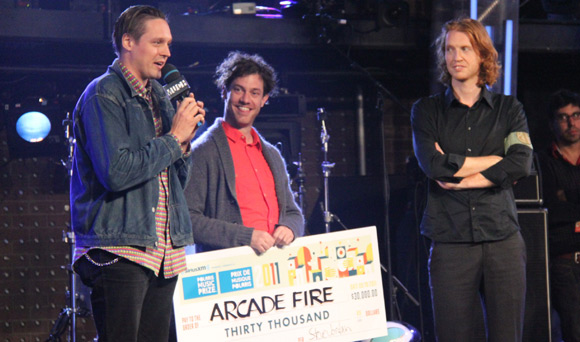 Tonight, in a star studded gala, The sixth annual Polaris Prize was handed out.Â  The night featured performances from some of the ten bands that made the Polaris Short List including Austra, Braids, Galaxie, Hey Rosetta!, Ron Sexsmith and Timber Timbre.

When the big moment came, Arcade Fire were announced as the winners of the Polaris Prize.

I can already feel it, you don’t know what The Polaris Prize is do you?

The Polaris Music Prize is a not-for-profit organization that annually honours, celebrates and rewards creativity and diversity in Canadian recorded music…and they throw one hell of a party. Past winners include Montrealâ€™s Karkwa (2010) for Les Chemins De Verre, Torontoâ€™s Fucked Up (2009) for The Chemistry Of CommonLife, Dundasâ€™ Caribou (2008), for Andorra, Montrealâ€™s Patrick Watson (2007) for Close To Paradise and Torontoâ€™s Final Fantasy (2006) for He Poos Clouds.

I didn’t really talk about the awards as much as I had in the past few years because it always seemed like Arcade Fire was a sure thing.Â  I mean they won the Grammy, Brit Award and Juno for The Suburbs for god-sakes, how can they not also win the Polaris prize?Â  The album is plain and simply perfection, I’m glad it’s gotten the international recognition that it so rightly deserved.

But there’s a problem….

The Polaris Prize came with a cash prize of $30,000.Â  I don’t know if you’ve ever been a struggling artist in Canada, but I’m guessing that money could have gone a long way for the artists that will never win Grammys or even being invited to Junos…oh who am I kidding, EVERYONE is invited to the Junos.Â Â  Obviously Arcade Fire has had an amazing year and while awards like Grammys and Junos don’t come with cash prizes, I’m guessing the residuals of winning big awards like bigger tours, album sales and huge contracts is enough to help the band stay in the black, which maybe can’t be said for the other nine Polaris Short list nominees. I guess I’m sorta stuck on the thought that it would have been nice to see an artist win the $30,000 that would use every penny to put a dent into making their next album.Â  Given Arcade Fire’s year, that money will likely be gobbled up by agents, managers and lawyers.

So my question is this: Should Arcade Fire have won The Polaris Prize?

I think there’s enough that I could argue both sides until I turned blue, so I’d love to know what you think!

Click here for more information about The Polaris Music prize!

If you want to see the awards yourself, they’ll air on Much on September 24th at 1pm and Midnight.