Another Day, Another Idol

Of the many highlights of the weekend, I’ve decided to start with the one of another Canadian Idol encounter. Some may think that I am trying to find or “stalk” them, but I prefer to think it is the other way around, and so does my lawyer.

Anyway, a good friend of mine was in a show called Canadian Explosion here in Calgary (More on that later). But one of the singers in the show was none other then Canadian Idol 3’s third place finisher Aaron Walpole !

After the show my roomie and I went out with cast and some friends. During this time I got to meet Aaron. Who was very nice and much more “rocker” than I remember what with the piercings all over his face!

Now for all of those who don’t realize how actually persuasive I can actually be, I present the following picture: 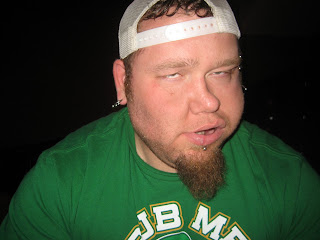 What a good sport. No one can avoid the power of SHAKEFACE! (Try it, it is always the most hilarious thing to get people going!)

I’ve also made it a personal goal to meet a Canadian Idol finalist who made it above 3rd Place. Damn Billy Klippert was robbed!

Here is a clip of Aaron signing, really quite a voice.