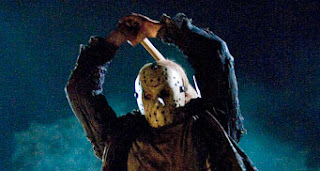 Another Friday, another horror movie.

Rumors are swirling that New Line Cinema is planning on making a sequel to the winter hit Friday the 13th. Now normally I would totally be cool with horror movie sequels, I am more excited for Halloween 2 then I am my next pay cheque, but I have a problem with Friday the 13th….

The first one sucked so hard I am having trouble coming up with ways in which this movie was awful. Even for a horror movie it was impossibly stupid. I literally could not imagine how the writers could come up with a more stupid movie.

The following is a list of things stupider than Friday the 13th:

Want an example? During the film the surviving the teens run into a barn. The guy tells the girl to hide. She hides behind a lamp. A lamp people, a LAMP!

Shit, this just ruins my Friday.