And the new host of MTV Live is….. 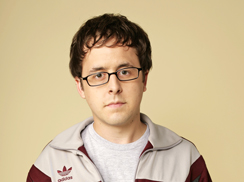 It was one of the most coveted co-hosting gigs in all of Canada and today, MTV Canada announced who would be sitting beside Nicole Holness as Daryn Jones‘ replacement on MTV Live…and it’s a familiar.

When the show returns on July 3rd, Paul â€œThe Internâ€ Lemieux will no longer be the intern, instead he is stepping up to the plate to co-host the Gemini-award winning show!Â  This is a pretty great move, as Lemieux had essentially been the show’s third co-host for the past view years, garnering throngs of teenage fans from coast to coast. When I interviewed him last year, girls circled us like we were bait, I think he’ll be great. (I didn’t mean for that to rhyme.)Â  And it looks like MTV Live will also have a replacement for Paul, who was often the brunt of the jokes on the show.Â  Earlier this weekend, comedian Dave Merheje tweeted that he would be joining the show as well.

I’ve said it before and I’ll say it again, MTV Live is one of my favourite shows.Â  I think it’s one of the funniest and most original shows in our country right now.Â  I know I’m not exactly their target demo, but it’s still a blast to watch!

Paul’s move up the MTV ladder is an interesting one, in terms of history. Lemieux is following a near parallel move of Rick “The Temp” Campenelli, who once upon a time interned at Muchmusic, made his way to co-host of Much on Demand and then eventually made the jump to Entertainment Tonight!

I’m excited to see how the new dynamic works out.Â  Creatively, losing Daryn Jones will be a tough fall to recover from, but I think MTV’s hired the right people to give it the ol’ college try.