>Now Available on The Q

Sunday mornings are usually reserved for drinking a coffee, reading the paper, doing some chores or sometimes meeting friends for brunch at a local diner. However, sometimes I wake up early and just feel like going to breakfast by myself. Getting a nice table in the corner and reading FFWD or do some people watching.

I go by myself because itâ€™s relaxing. You donâ€™t have to come up with things to say or have any particular interesting anticdotes to share. Itâ€™s just â€œyouâ€ time. The interesting thing about going to Nellyâ€™s on a weekend morning is that usually you are not the only guy sitting there alone. There always seems to be quite a few guys enjoying â€œyouâ€ time. I would estimate that most times at least half the table at the tiny diner are occupied with single men like me just enjoying breakfast by themselves. 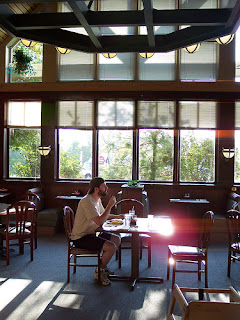 o and noticed all the guys sitting by themselves, I mistakenly thought I had stumbled upon a joint similar to â€œthoseâ€ truck stops that you hear about on the side of the highways. I cautiously entered the restaurant with barely anyone noticing and thought I realized that it be all right after all.

The waitresses at the 4th st Nellyâ€™s seem to be used to guys sitting by themselves. They quickly take away the second mug on my table without even asking if someone would be joining. I donâ€™t take offense, but is it because I look like a guy who would eat by himself? I try to not to dwell.

After placing my order I let the people watching begin. The restraurant offers up a wide range of characters for me to silently criticize. Across the way was the â€œreader guyâ€. You know the type, he brings an interesting book to read while eating. But instead of actually reading, he is just thinking about what people are thinking while seeing him read that book. He is very similar to the â€œlaptop guyâ€ at Starbucks, who wants you to see him writing the next great novel. But really he is just playing Minesweeper.

Then there is â€œcreepy guyâ€. Who flirts nervously with the young, and I mean young, waitress. He hopes that sheâ€™ll see past his creepy exterior. She doesnâ€™t and quickly brings up her boyfriend. You can see his heart break, but only until the even younger waitress refreshes his coffee.

Then there is the â€œolder guyâ€, probably retired. He looks forward to his weekly trip to the diner just for the little social interaction that might occur. He waits patiently to over hear a conversation about the struggling Flames or the newest political scandal just so he can put in his two cents. During this particular morning no one engages with him. He leaves the diner probably to return later for a late afternoon coffee.

Then there is me. I wonder what kind of guy they think I am? Iâ€™m might come across as a bit creepy, I mean I am staring at them and chuckling to myself. Thatâ€™s pretty weird right? Maybe they think Iâ€™m the â€œnew guyâ€. Relatively new to the city and neighborhood. They think I think Iâ€™m cool for going to a diner by myself. But really I just woke up hungry.

Soon my food arrives and I realize something else. There are no women sitting by themselves. Come to think of it, there never are. Not at the diner, the movie theatres or even shopping at Ikea. Why is this? I canâ€™t even begin to try to figure out why men donâ€™t mind doing things by themselves while woman rarely ever. Maybe single men are just more willing to go out there and see what is going on. Maybe single women fear getting hit on by creepy diner guys or getting written about in a Calgary blog. But those are just ideas, I donâ€™t know why. Maybe someone can it explain it to me. Maybe over coffee.

So as I finish up my breakfast and open the sucker wrapper that accompanied my bill, I look around the restaurant one last time. â€œCreepy guyâ€ is still there. Heâ€™ll probably be there till well after lunch. The â€œreading guyâ€ has moved across the street to Starbucks but is replaced with â€œmarried guyâ€ probably needing a break from his children. I leave the restaurant and begin my walk home.

I like my Sunday routine. Itâ€™s relaxing. I think itâ€™s important to take time to yourself and enjoy your thoughts. And I think as long as those thoughts donâ€™t turn into voices I donâ€™t think there is anything wrong with eating at a diner by yourself, no matter if you a man or woman.