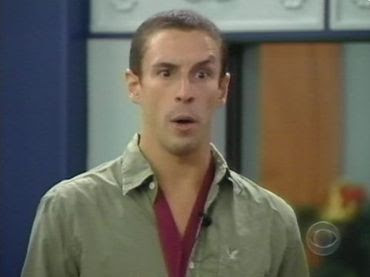 I have never been a fan of love. I think it is expensive and gets in the way of more important things like spontaneous trips and staying home alone on a Friday night while watching stupid movies with popcorn and warm milk.

People always bug me. “But Mike, don’t you want to be in love?” And you know what I tell them? “Watch Big Brother.” They usually walk away confused (they so often do) but on tonight’s Big Brother 8 was yet another example of why love should have nothing to do with it. (Oh Tina Turner)

Eric played a stupid game. He wanted to be that guy that was the game changer, which was fine, the problem was that during his game changing ways he fell in love with Jessica which inevitably got her and him both evicted tonight in the much anticipated double eviction. If Eric had just played the game he originally should have played Zach, Daniele and Dick would have been sent home long ago and poor, yet awesome, Jameka wouldn’t be in there all by her lonesome self.

Which leads me to my other complaint about Big Brother, the good guy NEVER WINS! You know why? Cause the mean souless people always vote them out! I mean really look at the past winners, besides Drew who won by default none of the winners are actually good nice people. There is Eddie, Will, the mean Chinese Girl and Mike Boogie! Like come on! That list reads like a who’s who of venerial diseases!

So for now I’ll keep reading my Big Brother 8 spoilers and hope and pray that poor Jameka can make it through 12 more days. (I’m such a poet….read it aloud, it will make more sense.)