American Idol: Voting myself out 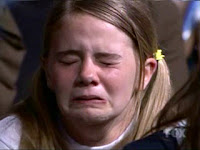 I never thought this day would come.

I took American Idol off of my Tivo Season Pass list.
The decision had been weeks in the making and it all started a couple of weeks ago when I was having a scheduling crisis. Â LOST, Nip/Tuck and American Idol Results are all on at the same time on Wednesday. Â And since Helen Keller could probably predict who is going home every week on American Idol, the results show simply wasn’t necessary. Â So I would cancel the recording each week and then I would get to enjoy the awesomeness that is Lost and Nip/Tuck.
Then this past weekend I noticed something. Â I was going through my TIVO list and I had three weeks of Idol performance episodes left to watch. Â And without hesitation or remorse, I deleted them. Â I realized that I just don’t care about this show any more. Â The judges don’t say anything relevant, Ryan Seacrest is still fine but he hasn’t changed in 8 years and finally I have to say that I think this is the most boring Top 10 this show has ever had.
Okay maybe no the most boring but the final two is all but between Danny “I’m really crazy religious but I don’t want to talk about it because then you won’t find me as likable” Gokey and Adam Lambert who is just so over the top. Â I mean he is really ridiculous if you think about it. Â Sure Kris Allen is good and if I could add him to Facebook I would, but the judges haven’t warmed up to him yet, which does not spell good things for his future.
So I’m done with Idol. Anything important that may happen, I can find out about the next morning and I’m okay with that. Â I don’t have room in my life for American Idol anymore and I think it’s a good step. Â It clears up my schedule and for some reason I sleep better at night…..until I watch this aforementioned crazy religious video featuring Mr. Gokey himself.