Altered states: Metric’s concert is at the Wrong Place At...

Altered StatesÂ is an exclusive three-city concert series that kicked off in Calgary on with Metric. Â Next, it heads East toÂ TorontoÂ with a performance fromÂ Death From Above 1979Â and toÂ MontrealÂ with sets fromÂ A-Track and Chromeo. Â I decided to send my friend Brie, who knows infinitely more about music than do to check out the show. Â For your chance to see the Toronto and Montreal shows,Â follow the link.

Having lived most of my life on an acreage outside of Calgary and having worked for the Calgary Stampede for a 7-year stint, I still wasnâ€™t able to say that Iâ€™d seen a concert from the floor of a cattle ring. Last night, thanks to Molson Canadian & Noiseyâ€™s Altered States concert series, I now can say that I have. (Not entirely sure what good itâ€™ll do me being able to say that â€˜I haveâ€™, but who cares.)

The Calgary Stampedeâ€™s Victoria Pavilion, which was previously only known for hosting all-star 4H competitors was now going to host Mac Demarco & Metric. Altered States tagline of â€œWrong Place At The Right Timeâ€ was all too fitting when I walked into the small and intimate setting that the Pavilion provided. Faint wafts of that all-to-familiar cow manure smell made it seem like I was getting ready to see some cattle be sold, not a rock show. However, with a couple cans of Canadian in hand, I knew the night had some truly impressive music in store.

As a massive fan of Canadian independent music, I was beyond excited to see Edmonton-raised Mac Demarco supporting a well-known Canadian band like Metric. Being somewhat familiar with Mac Demarcoâ€™s musical catalogue and more familiar with some of his signature immature on-stage antics (think nudity, trashing instruments, penis jokes, etc.) I was excited to get to see it live myself. Mac and his band came onstage and he immediately launched into some hilarious Oprah-esque jokes about how we were all randomly getting red KIAs while one of his band members opened a bottle of Canadian Club Whiskey, â€œBecause thereâ€™s nothing wrong with a little Canadian Club on a Friday nightâ€. The bandâ€™s laidback, some might say â€˜slackerâ€™ vibe isnâ€™t so much apathetic as it is refreshing. Itâ€™s obvious the four guys are up there to play great music, get drunk and have a good time, in that order. Their set was filled with synth drenched, psychedelic songs like â€œChamber of Reflectionâ€ and dreamy, sunny, AM Radio songs like â€œThe Stars Keep On Calling My Name.â€ Sadly (or not), none of us actually did walk out the venue to see KIAs with our names on them, but the fans in front of the stage did get to pass around the bandâ€™s bottle of Canadian whiskey. 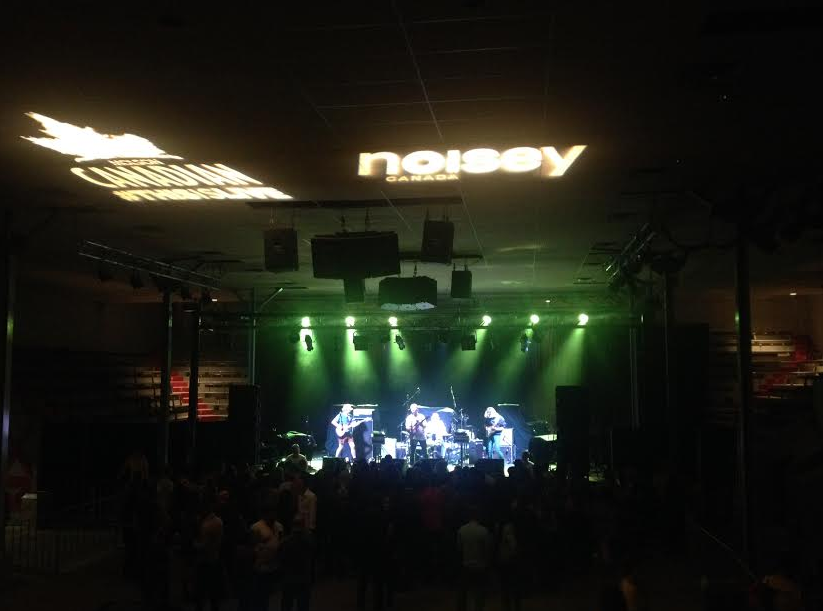 The crowd of that gathered for Metricâ€™s set took me by surprise. Ranging from jacked body builders (I swear Iâ€™m not lying) to your typical mid-20s hipster wearing an outfit straight out of Boy Meets World. Metric seems to consistently make music for the masses. The first thing I noticed when Emily Haines and her band came on stage had to be the womanâ€™s incredibly toned and amazing legs â€“ I couldnâ€™t and still canâ€™t get over them. Iâ€™d be lying if I said I didnâ€™t immediately start to wonder how much it would cost me to have a plastic surgeon replicate them on me. Once I was able to pull my eyes away from her gorgeous gams, I was able to register how energetic the entire band was. They launched into their set and like a speeding locomotive didnâ€™t loose steam until their last song. They transitioned seamlessly between hits like â€œSyntheticaâ€ to â€œGold, Guns, Girlsâ€ not losing an ounce of excitement. All the while, the small crowd that had access to the show kept feeding the band with energy as they jumped during â€œYouth Without Youthâ€ and punched their fists into the air during â€œDead Disco.â€ Closing the show with the anthemic â€œBreathing Underwaterâ€, all four band members came to centre stage to play as the crowd sang to them the songâ€™s chorus. Scream-singing the words â€œIs this my life?â€ seemed extremely fitting for the one-of-a-kind concert experience I was lucky enough to witness. Thank you so much to Molson Canadian & Noisey for such a great night.

Want to go to the next concert?

Altered States is heading East to Toronto with a performance from Death From Above 1979 and to Montreal with sets from A-Track and Chromeo. To enter to get in to see either of these shows, follow the link.Â