When you think of surfing, those are likely the places you think of. You probably don’t think about Alberta, which would be fair. When it comes to landlocked provinces, we do that very well. Surfing, not so much.

Or so I thought.

You may have heard of the recent river surfing phenomenon that had hundreds of Calgarians giving it a go this summer, but by all accounts it was really hard, really busy and I don’t know about you, but I’m not a big fan of learning how to surf with lots of people watching. And, as it turns out, it’s not even the only place to surf in Alberta.

Did you know that Edmonton has a surf club? Yes, it’s true and it’s awesome. I recently signed up for a class and I think I’ve talked about it every day ever since. I had surfed a few times in my life before. Once in Hawaii and another time down south, but neither time was anything that anyone would call successful. So going into the class I was already nervous, because surfing is hard. It involves a lot of concentration and every time you fall (and you will fall a lot) it hurts your pride just a little bit. But, it’s also a ton of fun. The anticipation of the waves, the feeling you get when you almost stand up and how falling just makes you want to get back up on that board and learn from you mistakes, it really is a thrill. 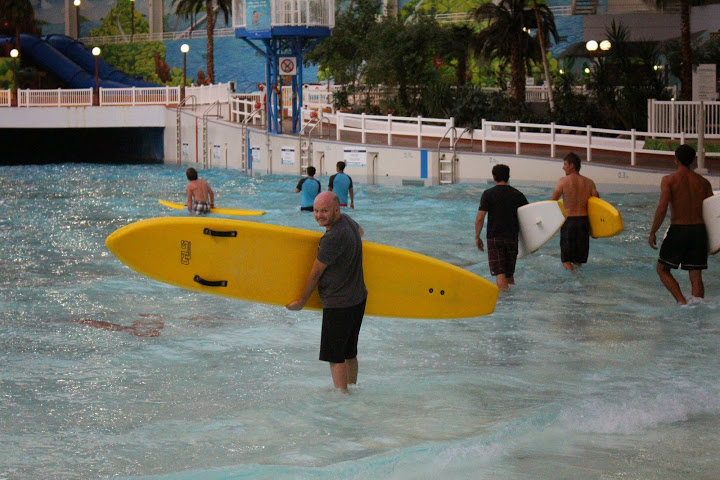 The Surf Club was started last year by Jono Kusyanto and Kris Yap-Chung. Every week they use the wavepool in the West Edmonton Mall‘s waterpark for both instruction regular practicing for people who

Like in the real surfing world, the Saturday morning class starts early at 7:45am. When I got there, I checked in and was quickly given a huge 10 foot board. There are smaller ones, but the bigger ones are easier to learn on, so why wouldn’t I take the easier one? When it comes to surfing, always take the easier one. Some people were wearing surf shirts and others went shirtless. Not owning a surf shirt and having heard about something called nipple rash, opted for a t-shirt. Besides that, you don’t really need anything else. Out in the real world, you might need water shoes, but since you’re just in a wave pool, regular swing wear does the trick.

We spent about thirty minutes learning the basics on land before heading out to the waves. Before I got into the water, I assessed the other people in the class, because these people were likely about to see me fallâ€¦.a lot. There were some younger guys, an older couple and a few of us right in between. As soon as the waves started coming, you could tell that we were all at different skill levels. Which was totally fine, because, actually it was nice to watch people who were good, but not too good, because you could see how they were doing it. It was actually really encouraging. 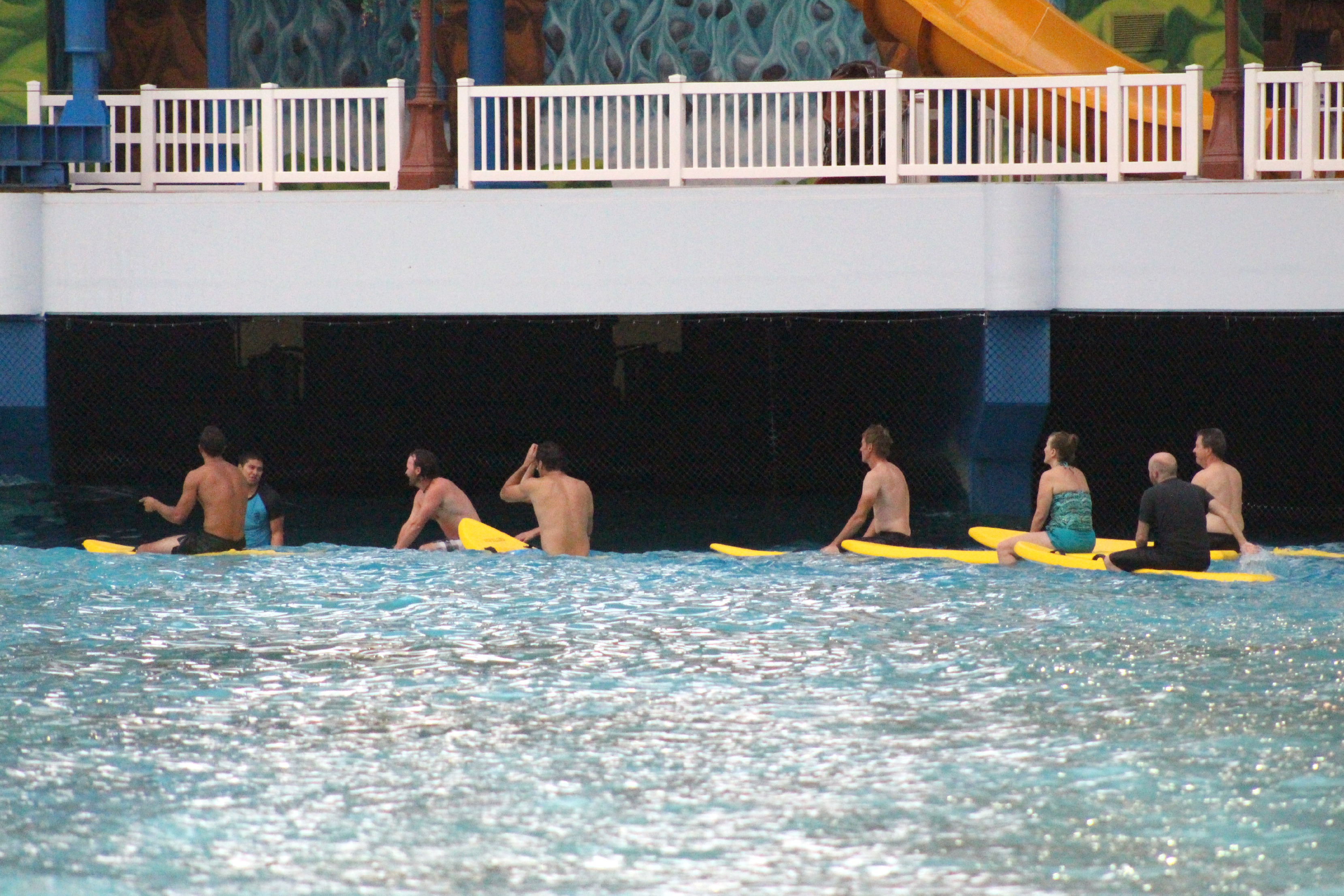 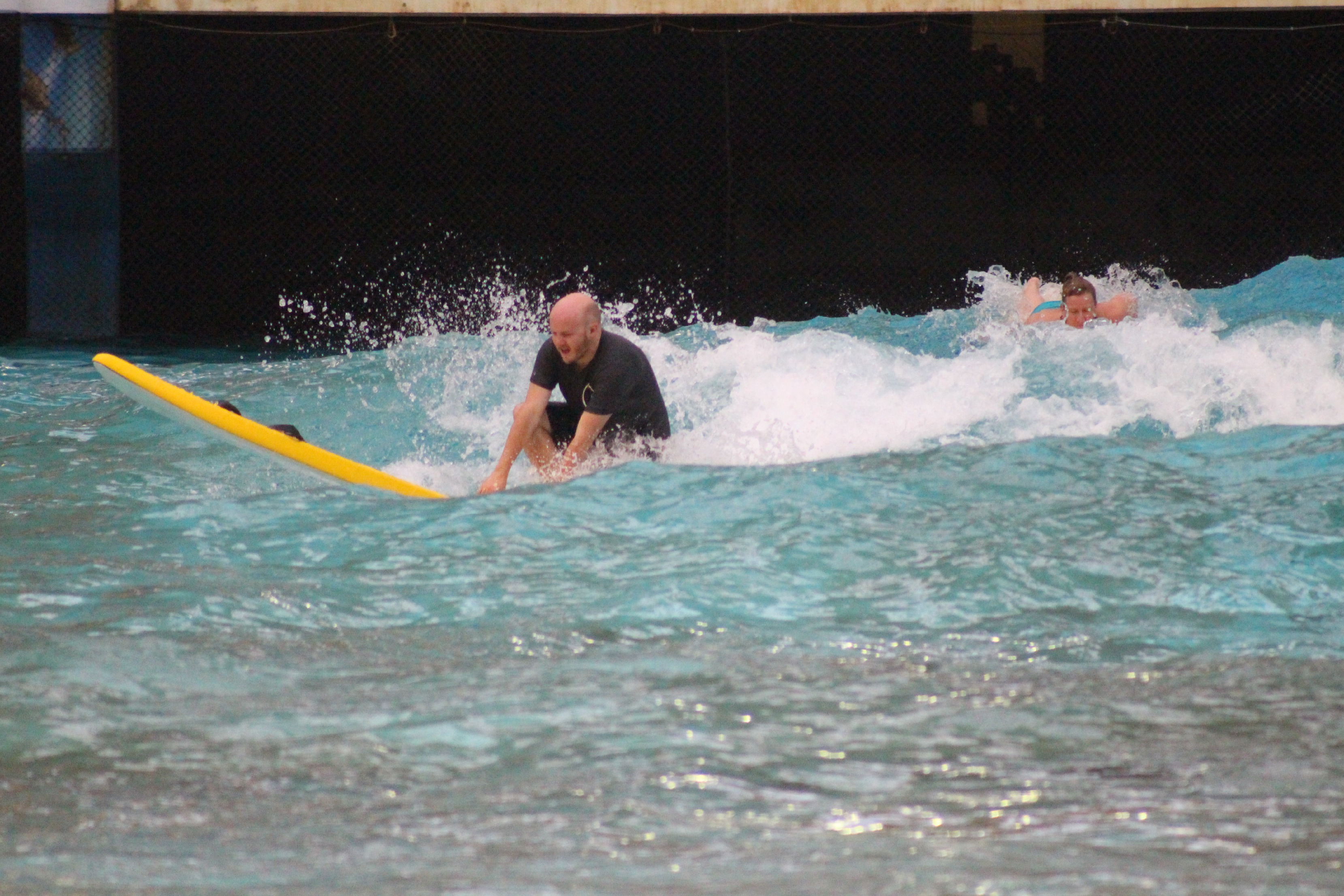 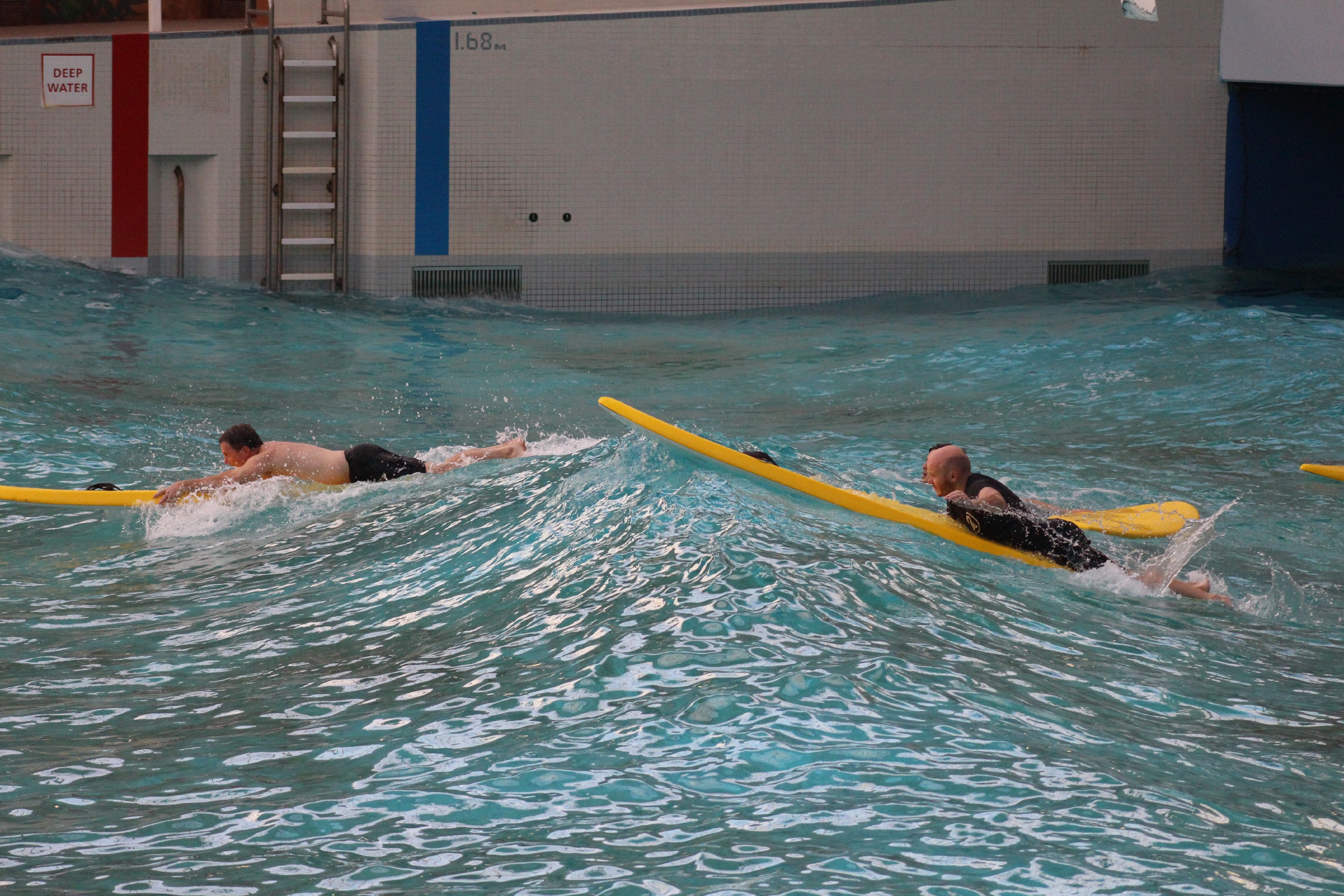 The idea of learning to surf at the West Edmonton Mall works on so many levels. When you’re out in the ocean, it can take forever for you to get a wave and even if you see one, as a beginner, there’s practically no chance of you getting it the first time, even just to let it carry you in. The three to four foot waves at the WEM come in sets of five, and the fourth and five waves are very surf-able. The waves come every 40 seconds, meaning that in an hour you get more than sixty chances to surf a wave.

The first few times I fell and started to get panicked. I really didn’t want to spend the next hour falling over and over again. But the instructors were super patient and explained it to me very simply: The waves are the exact same every forty seconds. So, step by step, figure out what you’re doing wrong and eventually you’ll get up no problem. And you know what, it wasn’t long before I was able to at least stand for a second on the board. A second in surfing feels like hours, so to me I felt like professional. It was such a rush.

Both Jono and Kris told me they don’t expect people to surf exclusively at the West Edmonton Mall. But they see it rather as great training before you go on a trip where you might try surfing in the ocean. It only makes sense to me to learn the basics at the The Surf Club first, then when you get out in the real world, you’ll at least have a some experience dealing with waves and the timing on when you actually need to try and stand up (it’s much later than you actually think.) 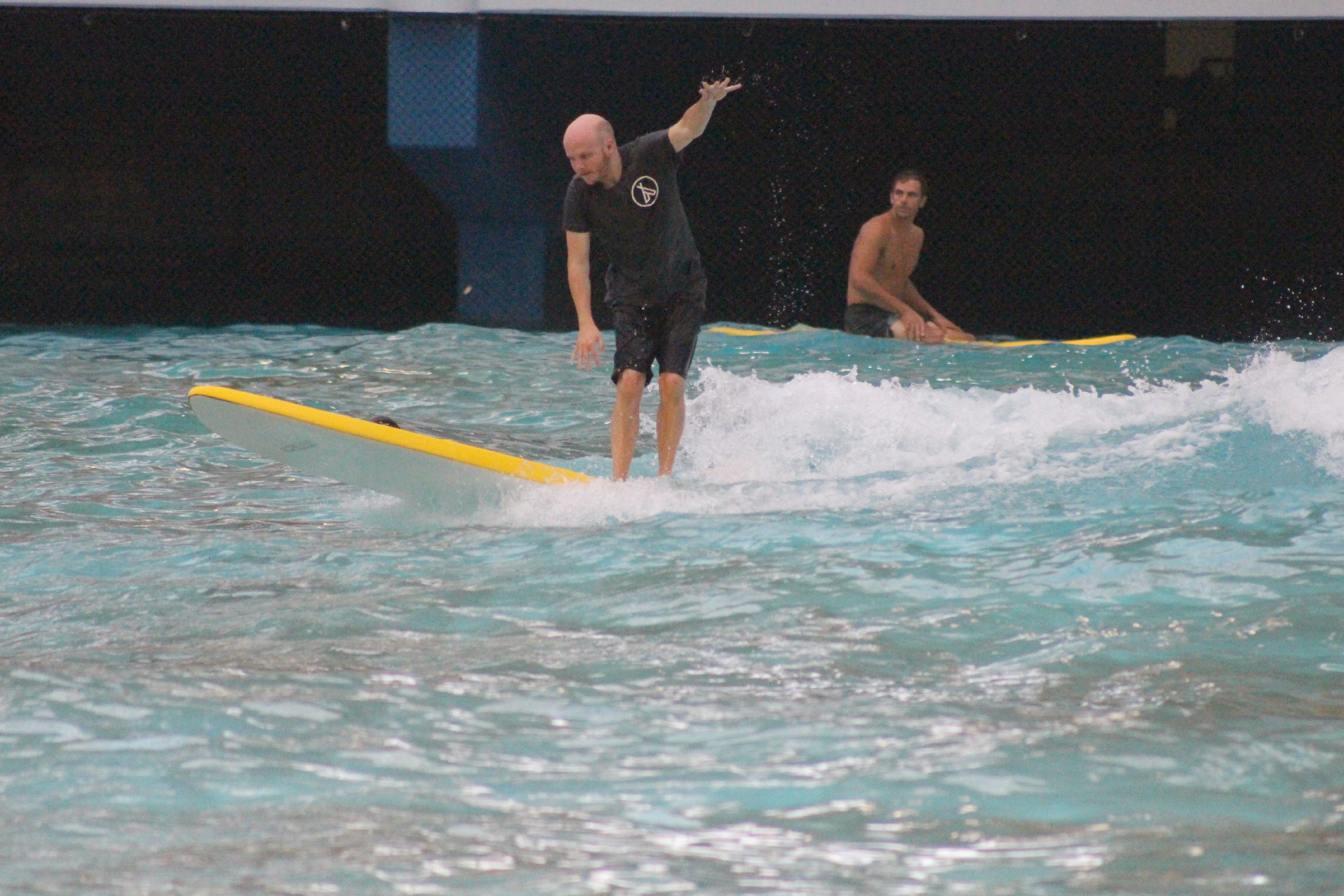 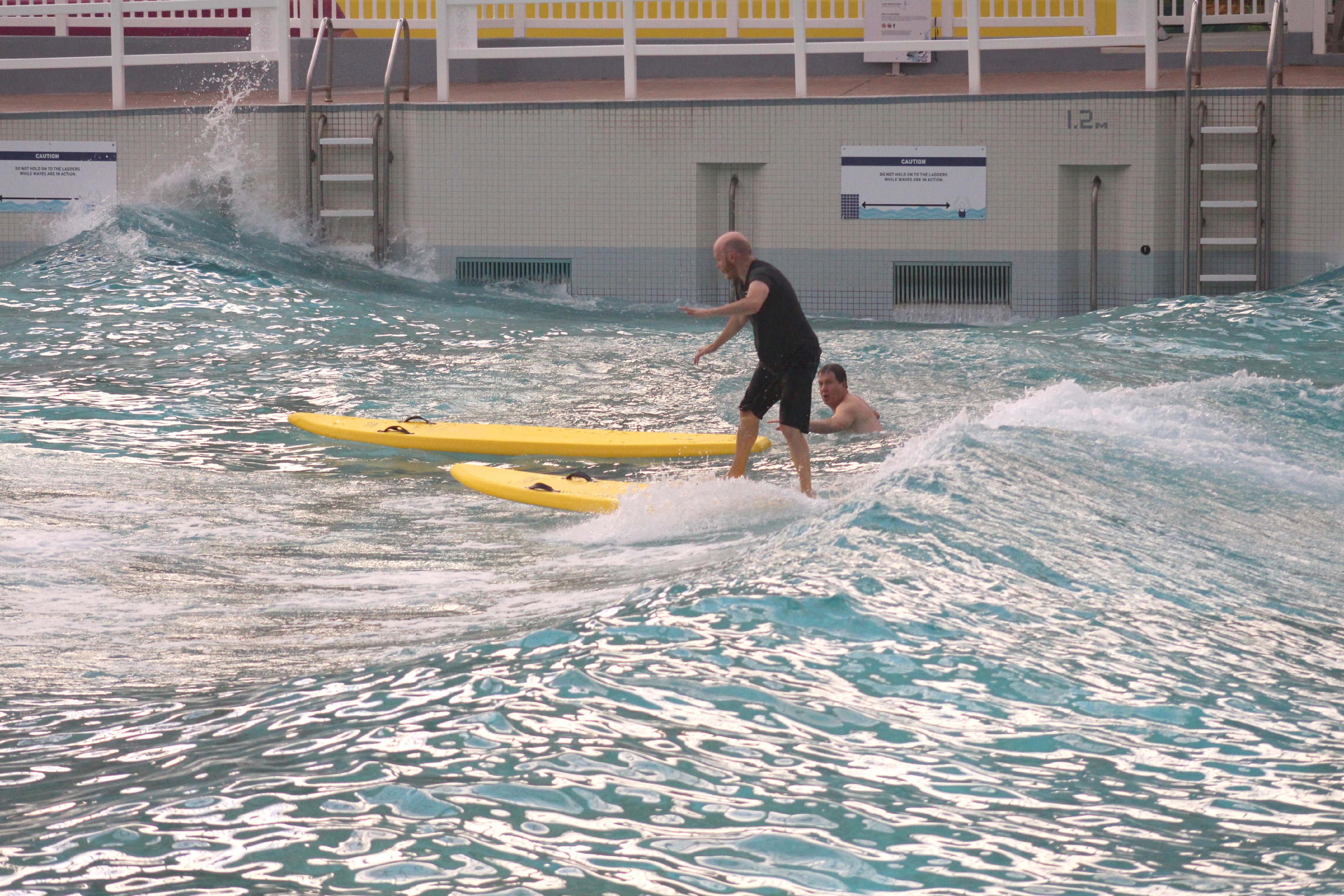 Actually, that just reminded me, one of the first videos I ever posted was me trying to surf in Hawaii. Oh man, itâ€™s so bad:

Oh like I’m the only one that still plugs his nose in the water!

All this is to say that I wish the surf club existed back then. The other thing I really like about The Surf Club is that even if you donâ€™t have intentions to go somewhere in the world and go surfing, thereâ€™s nothing wrong with just checking it out in Edmonton. Itâ€™s warm, itâ€™s exercise and itâ€™s indoors. Iâ€™m not sure if you know, but Albertaâ€™s winters can be long, so why not feel like youâ€™re in the tropics, without leaving your province.

By the time my lesson was done, I had gotten up a few times, but I was ready for it to be done. It was a ton of fun and it was pretty tiring (see above paragraph about exercise.) But if Iâ€™m being honest, it was the most fun thing that I had done in a long time. It was challenging, without being scary. It was safe and warm, but thrilling and encouraging. Iâ€™ve always loved West Edmonton Mallâ€™s water park, but now I have a reason to go back, even if it is a bit earlier. I already canâ€™t wait to get up on that board. Once you do it, youâ€™ll see why! 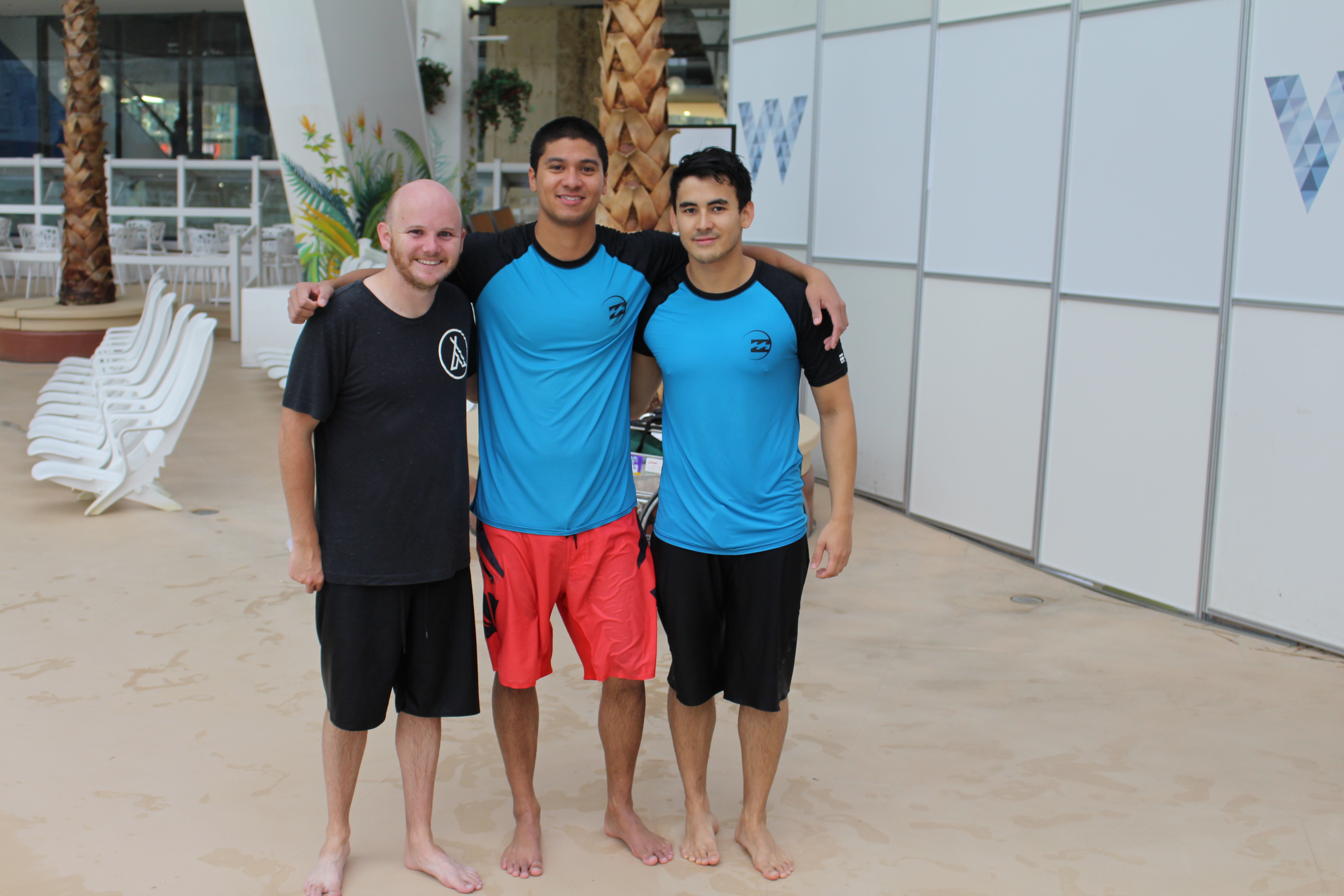