>When Sidney Crosby scored that Gold Medal winning goal a couple of weeks ago, it quickly became Canada’s newest “Where Were You When…” moments.

(Other such moments include 9/11, Princess Diana and the final episode of You Can’t Do That on Television.)

Yesterday, Epcor released their water consumption chart for the time during the now infamous hockey game, and it turns out we were all in the same place, at the same time: the bathroom. 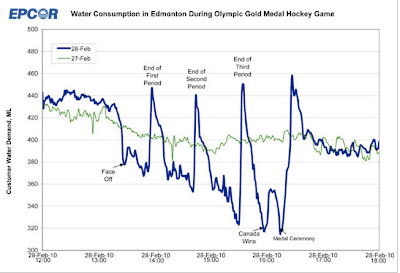 Unless all of those people went #2 at the same time….gross, never mind.