Accessible Musical Theatre, Can It Be? — Legally Blonde the... 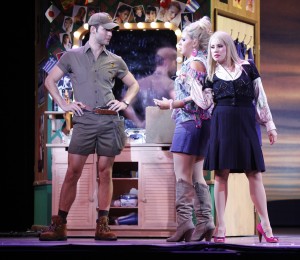 It is no secret that I am a music fan, and I also really enjoy theatrical productions as well, but truth be known I have never had much exposure to musical theatre. In fact, I am quite certain that the only reason I was given this assignment tonight is that Mike (Bloggity as I like to call him) is ill and unable to leave his couch.

This production has run on Broadway in New York as well as in the West End of London so I am certain that it is good. I say that I am certain that it is good because I have actually never seen another musical live so I have no point of comparison. There is no doubt that the cast is talented, and the production value is very high, the entire sold out crowd was engaged in the story and bursting into applause at the end of each musical number, complete with complicated choreography.

What I really liked about Legally Blonde the Musical is that it is musical theatre that is very accessible. There is sometimes a presumption that musical theatre has to be for the snooty and pretentious among us, or maybe it was just me that thought that, either way after seeing this musical I no longer have an archetype about who can enjoy a musical. Go see this production if you want to experience a bright, vivacious night of music that, unlike me, doesnâ€™t take itself too seriously.

Dan Meades always gets pop culture trivia questions wrong; he finds himself politely laughing along when others make jokes about TV Celebs and it took him months to realize that Brangelina is actually two separate people. In fact he had to lie through his teeth just to get Bloggity to let him write music reviews. Some of the lies he told were that he was born and raised in St. Johnâ€™s Newfoundland and made a living as a George St. Musician through University. In fact Dan is almost completely tone deaf which makes it all the more remarkable that he can review concerts at all. You can reach Dan at danmeades@gmail.com