A Weekend Away at the Delta Kananaskis 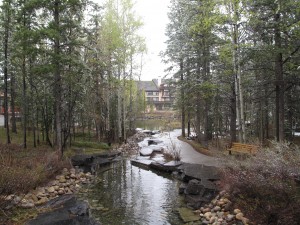 I’ve never had any problem admitting that I’m a hotel snob. Â Due to the fact that I live so close to the Fairmont Banff Springs and Lake Louise, they’ve both become my second home any time I need to get away from the city. Â That my friends is almost monthly.

But this past weekend, I was put up in the Delta Kananaskis and thought it might be time to expand my horizons. Â And this was no regular weekend in the mountains. Â Even though it was the last weekend in May, Calgary and surrounding areas got dumped on by heavy snowfall. Â Kananaskis was no exception. Â The trees and the mountains were covered with snow, which made for a perfect background for a weekend out of town.

Adding to the scenery, the whole resort wraps around a beautifully serene lake that is fed by a couple of different waterfalls. I took dozens of pictures, I could only imagine what it would have been like if you were able to actually see the mountains is not so distant background. 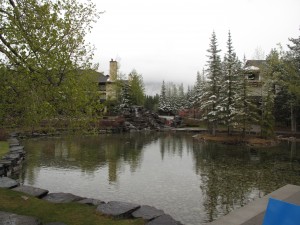 I’m not a giant fan of camping, but the Delta was nestled so thickly in the woods, that it felt like we were camping, (only luxuriously.) Our room was the perfect size, it had a working fireplace and over looked the snow-kissed trees. Â For me, this is exactly how camping should be done. Â I particularly noticed our surroundings when were eating dinner Â and we were lucky enough to get a window seat, just a few feet away from the forest. Â We felt like an animal or two was going to come out at any moment. 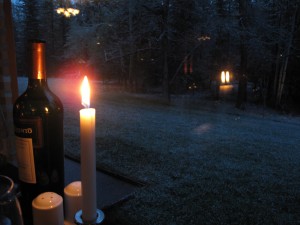 Since we didn’t see any animals, we decided to eat them instead.

Since I’m from New Brunswick, I have never found reasonable seafood in Alberta, nor would have I recommended you ever try it. Â But the lobster bisque at the restaurant was ridiculously tasty. Â We only ordered it as an appetizer, but we were stuffed even before the main course came. Â Days later, I’m still dreaming about it. 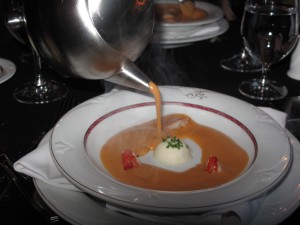 In the morning I really enjoyed the french toast topped with fresh stawberries. Â I could be biased though, I love any breakfast that includes ham. 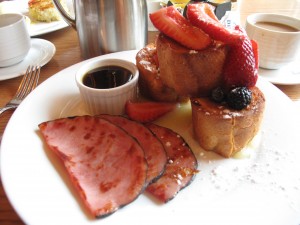 Perhaps what I enjoyed most about the resort was that there weren’t tourists hiding in every corner. Â Banff Springs and Lake Louise have advertised themselves as tourist attractions, which means any time you sit down to eat or find a relaxing corner to read (or blog), there is always a group taking pictures or laughing loudly.

The resort really felt like a tiny and private village. Â We loved strolling and wondering around the grounds as the snow fell and the sun began to set. Â  I really can’t emphasize how quiet the whole weekend was. Â As we sat on the bench around the lake, we imagined all the stars we would have seen on a clear night. All this was before we discovered the outdoor hot tub, which had definitely been calling our names.

As a personal aside, I’ve always been annoyed that the Banff Springs limits it’s access to the outdoor hot tub to their spa patrons only and Lake Louise doesn’t even have an outdoor hot tub. Â And I know for a fact that they frown on attempts to swim (clothed or otherwise) in the actual lake.

I know I’m now picking on those other hotels, but really I’m just mad at my myself. Â I’ve lived here for five years and I have obviously been missing out on this gem of a hotel. Â It was quieter, more private and the room rates are cheaper than you might think.

If you are done pretending that you enjoy camping and you are looking for a secluded place to say, I highly recommend the Delta Kananaskis.