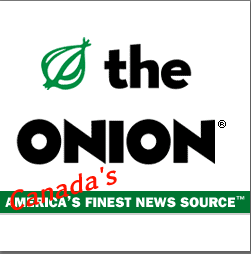 Hey The Onion!Â  Get your own country!

The hilarious news-skewing website The Onion, has just announced that a new print version of their stories will soon be available in Toronto!Â  Is it safe to assume that Rob Ford will be on the cover for at least the first ten days of content.

While some other cities like Montreal, Calgary and Vancouver might be a little jealous that Toronto is getting another cool thing that they aren’t, these cities should look at the positive, The Onion is doing all the hard work for us, we’re getting tired of making fun of Toronto all the time, this way on days when Rob Ford is out of town, the army isn’t called in to clear snow or their transit employees aren’t falling asleep, The Onion will no doubt have a bevy of jokes for everyone else to laugh at.Â  It’s really win/win people.

The paper will be distributed through The Toronto Star and will be available on news stands soon!