When you work in the media you get used to getting a certain amount of swag sent your way.Â  I remember when it first started, I thought it was a sign that I had “made it.”Â  Since then, I’ve been sent everything you could imagine including countless canes of Coke Zero, boxes of Axe Body Wash and more branded notepads than I know what to do with.

But if my last two pieces of mail are any indication,Â  PR companies seem to be going a whole new direction: clothing!

In the past few days I’ve gotten two pieces of clothing in the mail to help support and promote tv shows.Â  From Global’s Combat Hospital, I got a pretty nice tactical military scarf from the Kandahar-based drama series. Now I’m not about to perform surgery in a desert to test its authenticity, but I can tell you that it’s a scarf that most hipsters would kill to have.Â  Minutes after putting it on, I already felt my jeans getting tights, my bike getting smaller and I couldn’t seem to get Metric out of my head. 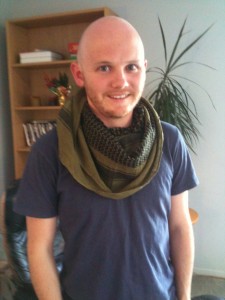 I’ve never been a person to fashionably wear scarfs with any sort of success, but I gotta admit, I know quite a few people that would pay a pretty penny at Urban Outfitters for the scarf.Â  I’m definitely going to hold on to it for a while, just in case Zooey Deschanel ever shows up to listen to some Death Cab For Cutie.

The second piece of clothing came just today.Â  It’s actually a really nice shirt from Under Armour in support of the new CTV series Expedition Impossible.Â  The show is going to be hosted by Canadian adventurer and zoologist Dave Salmoni and premieres on Thursday night.Â  Now in concept, the shirt is great, I did a little Googling and it’s actually worth about $40.Â  Totally not complaining. 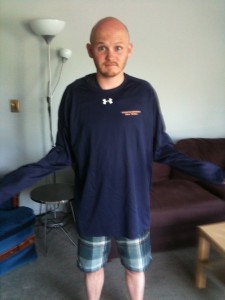 Unfortunately the shirt is literally five sizes too big.Â  Yup, they sent out XXL shirts to all the media across Canada….the ones who are most likely to already have eating disorders.Â  Not that I expect to have a custom shirt sent my way, but is XXL really the average size of the writers and journalists in this country?Â  If so, we’ve got bigger problems…literally.Â  Wouldn’t a large have been a little more reasonable?Â  Again, these are problems “white people have” and I don’t want to sound ungrateful, I’m from the maritimes, I’ll always take free clothing, I just find it kinda funny.Â  Now excuse me as I go purge my dinner.

Hopefully sending free clothes is a new trend in publicity, for the record, I’m typically a size small.Â  Just sayin’!