A Sequel: My Idea

>Do you ever go to the movies and wonder: “Seriously, who thought it would be a good idea to make this a sequel” In a summer full of sequels, or triologies my mind has been racing to think of what good movie actually deserves a sequel. My immediate thought was Labrynth. This is my all time favorite movie, and i’ll be honest, my desires for a sequel are completely selfish. I love the characters and would love to see Hoggle, Ludo and Sir Didymus again. But then the idea of a now thirty years later David Bowie wearing spandex made me think other wise. Although, I wouldn’t mind seeing Jennifer Connelly running around in the white shirt again.

Without a solidly good idea for a sequel in my head, I took off to Edmonton this past weekend with my visiting family. We brought the portable DVD player and I grabbed my second all time favorite movie: Who Framed Roger Rabbit. (There is no question mark, movie superstition don’t you know?) My 7 year old nephew had never heard of this movie until now and I was so excited for him to fall in love with it the same way I did.

Have you seen Roger Rabbit lately? This movie, although it was made almost 15 years ago, still holds up remarkably well. I honestly couldn’t tell that it was made so long ago. The mix of animation and live action is just as impressive as this week’s Transformers and the opening sequence of Roger and Baby Herman is still comedy gold.

So, I have to ask this: Why isn’t there a sequel to this movie? It is gold, and I know there is someone just someone (Travis?) who can come up with a great script that could bring Bob Hoskins and Roger back to the big screen. 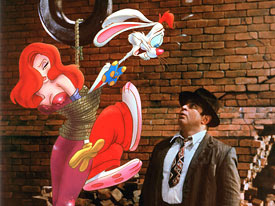 If you haven’t watched this movie lately, do yourself a favour. It is still so good. I remember as a kid watching it and having all the little stickers that came with the Roger Rabbit themed cereal boxes. I pretty formed my life around that movie. In University it became a novelty and my friends and I laughed like the first time we watched it. Now, as a grown up, to be able to watch it with my nephew and hear is laughter makes it even more of a classic movie.

So come on Hollywood. Stop with the orge, superheroes and pirates and bring on Roger! We have been waiting way to long.