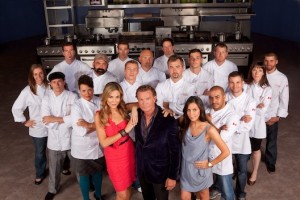 Score one for great Canadian TV!Â  The Food Network has just renewed Top Chef Canada for a second season!Â  The series is actually the networks highest rated program ever and I, for one, could not be more excited.Â  I love it!

When they first announced that Top Chef Canada was going into production, I thought it was interesting but I wasn’t necessarily jumping out of socks with excitment.Â  That unique skill is saved solely for the eventual announcement of Canadian editions of The Amazing Race and/or Survivor.

But when the show premiered, I instantly became addicted to the format, the interesting challenges, the fantastic casting and of course, Thea Andrews. Every week the show whips up a unique style of competition show all while giving the cast room to grow and breath.Â  Most importantly, it doesn’t feel too produced.Â  If a chef falters it’s their own fault that lands them at the dreaded Chef’s table to be scolded by the hilariously mean panel.

Perhaps the only place the show gets weighed down is with the constant product placement.Â  I get that ads in shows are a great way to re-coup costs, but Top Chef Canada seems to have taken it to the next level.Â  Sometimes I get worried that the show is more concerned about getting their advertising dollars than seeing a chef do well in a challenge…which I guess is probably true.Â  Ahhh the business world.

With a only weeks left in the first season, there doesn’t seem to be a clear winner…yet.Â  It’s a great group ofÂ  final chefs and I can’t wait to see how it all boils down. Top Chef Canada is perfection and it’s easily my favourite Canadian reality show on TV right now!