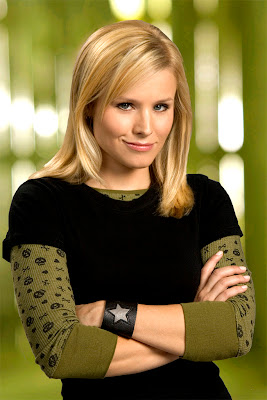 Today is a sad day. A somber day even. No not because we won’t see someone in Meredith’s family die for 4 months and not even because will have to live all summer with Jim and Pam. No I’m afraid it’s alot worse than that.

Veronica Mars has been canceled. Please take a moment.
She is no more.

The CW officially announced today that our teen sleuth will solve her last case in next weeks 2 hour series finale.

I’m not going to lie to you, I’m pissed. Like really really pissed. Like effected the way I worked today. I was in a bad mood. It didn’t help that I kept reading from different sites that maybe there was hope. Maybe the CW would come around. But my heart was all but broken today when creator Rob Thomas (no, not that one) stated: “I believe we are out of hope.”

And with that you guys missed out. The same you did with Arrested Development. Do yourself a favor and rent the first or second season. I’ll leave you with this. I have never ever lent my Veronica Mars DVDs and had them returned without the person watching every episode in a span of 5 days and begging for more. Stephen King, Joss Whedon and Kevin Smith can’t all be wrong.

I guess with times like this you have to look towards the positive. At least we got three seasons. At least UPN had the good sense to renew it when they probably shouldn’t have. The CW was nice enough to pick it up for one season. So sure we won’t get to see Veronica in the FBI or ever find out with the hell Logan’s mom went. But it was fun while it lasted. Thanks Veronica, we owe you.